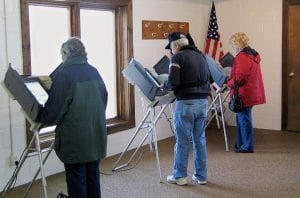 NEW LEXINGTON- Who says no one votes during primary elections? Nearly half of Perry County’s registered voters braved rains and floods Tuesday night to cast their ballots. The primary’s unofficial results held some surprises.

“I’m pretty excited,” said Harley, who added that it was a “tough race” against Cooperrider. As the general election approaches, Harley wants to focus upon bringing some “satellite,” or smaller businesses into the county. “Everyone wants to chase the big smokestacks,” he said, but actively pursuing several smaller businesses instead of one or two giant businesses may be more practical. He also wants to explore intensifying the sheriff department’s coverage of the county.

Shriner anticipates a competitive general election against Van Horn, and he believes at least two independent candidates-who are not required to register for the primaries-will run against him as well. Like Harley, he believes that job creation will be a major issue this November. “Everybody wants jobs,” he said.

“I’m pretty happy that we passed two of the three,” said Phipps. He said the department will experience “some loss in increased revenue” from the defeated levy, but none of the funding from the levies was earmarked for a new building or anything in particular. Funds from the EMS levy will go toward an ambulance or emergency medical services.

On the Republican side, Ron Hood won in Perry County with 1,928 votes, defeating Steve Austria (1,120), Dan Harkins (192, and John Mitchel (188). District-wide Austria won the Republican nomination. He will face Neuhardt in November.

In the Republican race for State Representative District 91, Bill Hayes defeated Chuck Wellman, 2,140 votes to 830. Hayes also defeated Wellman districtwide and will have a rematch with incumbent Dan Dodd of Hebron in November.