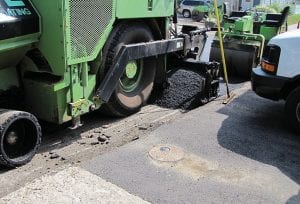 A ChemCote crew returned to Buckeye Lake Village July 20 for about a half day of repairs on Cranberry Lane. The crew ground up last summer’s asphalt in the two areas where the paving had completely broken through the base to dirt. After a quick sweep, a new layer of asphalt was applied to the deficient and in some areas, nonexistent base.

As the above photo clearly demonstrates, ChemCote continues to ignore the contract specifications and best practices that require the area being resurfaced to be thoroughly cleaned and treated first with a tack or bond coat. The new layer of asphalt is being laid down on a surface littered with debris (see left center) and once again without a tack coat. This will last about as long as last summer’s layer, but long enough to get ChemCote past the one year warranty cut-off.

M• E Companies inspector was no where to be seen. Now that their Buckeye Lake honey pot has been shut down, it appears they have fled the village like rats getting off a sinking ship. Service Director Tim Matheny has told us that ChemCote is not expected to return.

It’s heartening to see council members asking questions about the contract Jobes Henderson has proposed. Unfortunately, not one question was asked Monday night about the quality or extent of ChemCote’s repair. Time is quickly running out on that one year warranty. There’s about 6-8 weeks left.

ChemCote made two poor-quality token repairs. Cranberry Lane is cracking up its entire length and cracks are showing up on many other streets as well. Both M•E and ChemCote bear responsibility. M•E’s design and engineering work was grossly deficient. Their inspection services were worthless. ChemCote consistently cut corners on surface cleaning, use of a tack coat and on the specified thickness of the asphalt.

It appears that they are going to get away with it. It’s now or never for the mayor and council members to finally demand that they both meet the terms of their contracts. Hundreds of thousands of dollars are on the line!