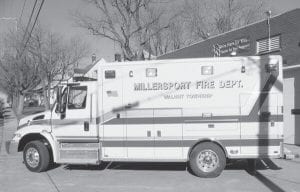 Millersport Fire Department recently took delivery of a 2007 Horton medic. The $179,000 squad is diesel-powered and provides more room for medics to treat patients. When it goes into service next week, it will replace a 1999 model with 115,000 miles as the ‘first out’ unit. The department’s ‘first out’ unit at the FairfieldBeach station is a 1993 model with 72,000 miles. The Village of Millersport borrowed $160,000 to fund the purchase with another $10,000 coming from the annual equipment allocation from Walnut Township. Beacon photo by Charles Prince.

MILLERSPORT – On-duty 24/7 fireand EMS coverage could end after one month on January 31.

Walnut Township voters approved an additional 3 mill firelevy Nov. 7 to provide funds to have a minimum two-person paramedic crew on duty around the clock. The new permanent levy will raise an additional $448,500 per year, according to Walnut Township Clerk Pauline Ety.

Yates and levy supporters promised the 24/7 coverage if the new levy was approved. Around the clock coverage started January 1. But that enhanced coverage may end January 31, if Walnut Township Trustees don’t commit to additional financial support, Yates told Millersport council members at their January 9 meeting.

Yates has been seeking a firmcommitment from trustees since the levy was approved. All township tax levy funds go to the trustees first. The current contract, between the Village of Millersport and Walnut Township Trustees, pays the village 65 percent of the revenues from the three one-mill levies to provide fireand EMS service for township territory north of Bickel Church Road. That amounted to $278,257 in 2006. The contract runs through 2008.

Wa l n u t To w n s h i p p a y s $1,000 a month to the Pleasant Township Fire Department to cover the portion of the Village of Pleasantville that is in Walnut Township. Last year, the Thurston Fire Department received $96,700 from Walnut Township to provide service south of Bickel Church Road. Trustees are giving Thurston $138,700 this year and have also agreed to an undetermined amount to pay part-time personnel.

“To start it (paid on-duty personnel), the Village of Thurston, out of their emergency funds, is contributing $30,000,” Trustee Sonny Dupler told The Beacon. Once that money is spent, trustees expect to have money from the new levy and will fund the department’s personnel costs, Dupler added. “Hopefully, we would like to go full-time (24/7) down there,” he said. Dupler said trustees weren’t sure whether they would have enough money to get to 24/7 at Thurston.

Millersport Fire Department made 905 runs in 2006, including 115 mutual aid runs for the Thurston Fire Department. According to county 9-1-1 center records, Thurston was dispatched 216 times in 2006, but only responded on about one half of their runs. Currently, the department relies on volunteers to make all runs.

Increasing on duty coverage at Millersport from 10 hours daily to around-the-clock costs an additional $125,000 a year using only part-time paramedics, according to Yates. That additional expense has to come out of the new levy voters approved in November.

Yates asked trustees for 65 percent of all firelevy funds at their December 12 meeting. “I want to do what we promised (24/7 on-duty coverage) as quickly as we can,” he said. Yates also asked trustees to release tax funds to the department when the township gets them or at least commit the interest earned on those funds for fireservice. The interest currently goes to the township general fund. Last year, Millersport received draws from the township in July and December.

Trustee Wally Gabriel proposed a township/village council meeting for December 20. Village officials said after the meeting that they expected to receive an addendum to the existing contract to reflectthe additional funds for 24/7 on-duty coverage. That hasn’t happened.

Yates told council members January 9 that there were no firedepartment issues on the trustees’ January 9 meeting agenda. He added that he told trustees that he would have to cut the new 24/7 on-duty hours back to 10 hours a day effective February 1 if trustees don’t commit funds from the new levy to the department. Yates said continuing 24/7 coverage would be irresponsible since the department would run out of money well before the end of the year and then could provide no on-duty coverage.

“I promised 24 hour coverage and I assumed we were getting that money,” Yates told council members. He pointed out that the department’s coverage area is basically the Walnut Township School District. Walnut Township School District territory represents 73 percent of the township’s tax valuation which means property owners in the school district are also paying 73 percent of the firelevies.

Council members then directed Yates to prepare a contract proposal seeking 73 percent of the firelevy income. Council members also want the township to turn over funds due the department within 30 days of receipt.

In a prepared statement, trustees said repeated complaints from township residents about “excess spending” at the Millersport Fire Department prompted them to request an annual budget from the department.

“Basically, they think we’re just giving them too much money,” Dupler explained. “I can’t complain on service.”

The village contract proposal will be presented to trustees by their January 23 meeting. Millersport’s part-time paramedics are currently being scheduled for just 10 hours a day in February. If trustees commit to sufficientadditional funding on January 23, Yates will immediately try to get back to 24/7 coverage as soon as possible.

Dupler doubts trustees will be able to make a decision Tuesday night. There isn’t enough time to review it and approve it in one meeting. “I like to sit and mull over things,” he explained.

“We’re committed to 24-hour a day coverage up here,” Dupler said. “He (Yates) knows he’s going to get extra money. It’s just a matter of how much.”