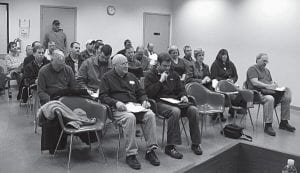 BUCKEYE LAKE – A dozen contractors competed for the opportunity to construct the Village of Buckeye Lake’s public water distribution system.

Sealed bids were opened and read publicly Feb. 26 at the Village Hall. Nearly all bids were significantly below the $4.5 million engineer’s estimate for the project. The highest was Speer Brothers at more than $4.76 million and the lowest was Stillion Brothers Excavating at more than $3.31 million. The rest of the estimates varied widely between the extremes.

Council Clerk Tim Matheny said council allowed a month to decide where to award the contract, although he doubted it would take that long. Once a contract is awarded, there will still be some time before construction begins as construction materials are ordered and engineers complete final details on where to install the underground water lines. “You can’t just come in and start digging,” he said. “There’s a lot of behind the scenes stuff to do after the bids are awarded.”

Matheny said contractors – he expects there will be more than one – will meet with village officials and Buckeye Lake’s engineering consultant shortly after the contracts have been awarded for a preconstruction meeting, where the contractors will discuss construction plans and a timeline.

Buckeye Lake Mayor Frank Foster said Wednesday he expects a contract to be awarded in April after the water system project’s funding agencies are satisfied all the paperwork is completed correctly. Foster predicts construction will begin in May. “They’ll want to get started quickly,” he said.

Foster also predicts a good chance the water rates will be less than anticipated because the bids for most of the project were significantly lower than expected, the village is likely to receive more grant money than expected, and more customers signed on for service than expected. “Everything’s coming together remarkably well,” he said.