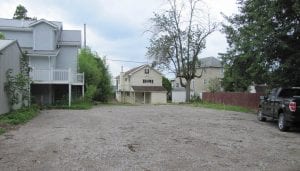 Licking County recently purchased the small yellow waterfront house (center) at 4771 Rosebaugh Circle West with a $100,000 CDBG grant. The purchase included another building that was demolished to create the 10-12 vehicle parking lot in the foreground. Beacon photo by Charles Prince.

BUCKEYE LAKE – Residents and business owners have two opportunities to comment on a proposed ordinance to rename Hebron and Walnut roads (Ohio 79) in the Village of Buckeye Lake to Buckeye Lake Boulevard.

Council President Kitty Zwissler said the names changes are required by ODOT in order to place “Buckeye Lake” on both sides of the Ohio 79 bridge being rebuilt over I-70. The idea came out of the recent BLR 2030 week-long design charrette with DPZ of Miami. The signage would be similar to that done for “Etna”on the rebuilt Ohio 310 overpass. The cost would be absorbed into the project’s budget.

Council member Arletta Ruton suggested holding a public meeting to discuss the name change. Council member Peggy Wells agreed that residents and business owners should have an opportunity to comment on the proposed change. “I support it (the name change) totally,” she added. Mayor Clay Carroll said holding to the three reading rule would provide two opportunities to comment on the change. The opportunities will be the regular council meetings set for Monday, July 24 and Monday, August 14. Both meetings start at 7 p.m. and council members would vote on the proposed ordinance after hearing public comments on August 14.

Ruton said she also supports the change, adding that Buckeye Lake should discuss it with Hebron officials. Zwissler said she or Carroll was planning to talk with Hebron Mayor Mike McFarland this week. She later learned that both ends of the Ohio 79 overpass are in Union Township, not Hebron. Union Township Trustees meet at 7 p.m. on Monday, July 17.

In a lengthy report, Planning and Zoning Commission Chair Karen Cookston said a subcommittee on height restrictions is expected to recommend adding height restrictions to the village’s zoning ordinance at the Commission’s July 11 meeting. If there is a consensus on the Commission – Cookston expects one – the next step would be a public hearing followed by formal drafting of the new rules for presentation to village council. Council members would have the final say on the new regulations and would have to hold at least one public hearing before making a decision.

Cookston said almost all villages have them. “It is not something that you can’t change,” she added. She referenced the recent BLR 2030 design discussions, adding that village residents might not be comfortable with all their plans.

Cookston went on to explain that if you have nothing in place you can’t add them after getting an application. “There is incredibly strong resistance to change,” she said. “Zoning has a very negative connotation. Zoning is frequently bad unless (the development) is next door to you.”

Cookston said the subcommittee, headed by Sherry Powell, came up with residential limits of 35 feet (three stories) and five stories for commercial. “We didn’t go nuts,” she claimed. For waterfront development, the height restriction would be from the water level. For all other areas, it would be from the street level.

Cookston said the proposed limits are “the norm in the area.” Without rules, she claimed, “Builders see an open season.”

“It is not the Wild West,” Masone responded. “We are talking about height.”

“There needs to be rules in place so builders know what they can do and can’t,” Ruton added.

Cookston asked council members if they have made a decision on the Commission’s recommendation on the annual reconfirmation process for commission members who are non-electors.

Personnel Committee chair Tim Ryan said the committee interviewed two candidates for the Commission that evening – Doug Stewart and former Commission member Stacie McCloud – and would be making a recommendation to the full council by their next meeting.

Council members refused to reconfirm McCloud for the Planning & Zoning Commission in January, noting that the charter prohibited an official serving on two commissions. She was reconfirmed for her position on the Parks & Recreation Commission.

Cookston claimed that, “The Planning Commission does not have an open seat.” She contends that McCloud is still a member even though council members failed to reconfirm here. Wells questioned Cookston’s claim but was cut off by Zwissler, who then cut off Cookston.

During committee reports, Wells said that if any rules were going to be changed to make the reconfirmation process clearer, they should go through the Rules Committee, not Personnel. She chairs Rules.

DVM said Monday morning’s open house for wetlands research project being conducted behind his PetPlex Animal Hospital was a big success. He said graduate students from four Ohio colleges and one Florida University were involved in the project. A Polish researcher will be coming to Buckeye Lake to review it.

In his brief report, Carroll said residents will soon be seeing some changes in traffic signs on Union and Myers avenues. The village’s posted speed limit of 20 miles per hour has been questioned because Ohio law says 25 miles per hour is the minimum speed limit except in school zones and areas that have conducted a traffic analysis. Buckeye Lake Village recently joined LCATS (Licking County Area Transportation Study); Carroll said the group is helping to first conduct a sign analysis and than a traffic study. He said some stop signs could be too close.

Zwissler brought up Licking County’s purchase of a waterfront home at 4771 Rosebraugh Circle West and a dilapidated building behind it. The building has been removed, creating maybe 10-12 parking spaces. The home needs a lot of work.

She’s upset because she learned about the purchase from a public notice in a newspaper about Licking County’s Community Development Block Grant awards. It was listed as a $100,000 grant for the Village of Buckeye Lake Parks and Recreational Facilities. Zwissler said it is rumored that the home and parking lot will be used as an access point for people with disabilities to get access to the lake. It may also have bathrooms for the disabled. “We didn’t know anything about it,” Zwissler concluded.

Council members also heard the first reading of an ordinance authorizing a $32,500 advance from the General Fund to the Storm Water Utility Fund. to pay the cost for ADR to set up a Storm Water Utility and develop a fee structure. The advance must be repaid within 24 months after the start of fee collection.