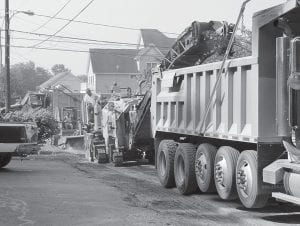 BUCKEYE LAKE- The end of the dust, dirt and ruts is in sight!

Crews began milling streets Monday and he expects crews would begin putting down new asphalt over the milled surfaces Wednesday or Thursday. From there, Christy said it would take 15 working days from the first day of paving to complete the job, assuming there are no major weather or traffic problems.

Village streets have been dusty and rutted since a village-wide public water distribution system was installed last year. Christy estimated crews would spend two days milling streets in Cranberry Bay before moving to the narrow but straighter streets like Union and Central. “From there it’ll go pretty quick,” he said.

Christy asked village residents and visitors to keep vehicles off of Buckeye Lake streets until the paving process is complete. He said he’d hate for the project to be delayed because paving crews couldn’t navigate around a parked vehicle.

• Buckeye Lake Village Council member and public safety committee chair Clay Carroll said his committee discussed changing Grandstaff Avenue to one-way-eastward from Ohio 79-for at least part of the road. He said two very active businesses are at the Grandstaff and Ohio 79 intersection, which often becomes congested with traffic. He hopes making Grandstaff one-way would help alleviate the problem. Carroll said the committee needs to gather public and local landowner opinions before making a final decision.

Carroll said the committee also discussed changing Dockside Street to one-way as well. Carroll said he received an email form a resident who prefers to see Dockside remain two-way, although committee members will discuss the change with the fire and police departments and gather as much community input as possible.

Committee members also discussed placing sidewalks across Ohio 79. Carroll said he contact ed ODOT personnel who told him the village has “a lot of control” over what’s done in the village as long as the village adheres to ODOT standards.

Carroll said ODOT personnel said they’d be happy to meet with village officials and Carroll suggested the committee create a list of potential crosswalk sites. So far, those sites are at the traffic light in front of Wendy’s restaurant, in the vicinity of the new Goodwill store (formerly Albanese’s grocery store), west of the North Shore Boat Ramp entrance, and near the Buckeye Lake Post Office.

• Buckeye Lake Youth Association Director Jackie France told council the youth association’s July 24 carnival in Buckeye Lake was a “great success,” even though the association experienced a minimal financial loss to sponsor it. “We’re very happy with the way things turned out,” she said, adding that the carnival’s goal was to provide Buckeye Lake youths with a positive activity, not to make a profit.

With that in mind, France said a youth association sponsored “trunk or treat” is being considered, whereby local businesses bring vehicles to a central location and distribute Halloween candy from the vehicles’ trunks. Council President Charlene Hayden suggested France contact other communities that have sponsored similar events and ask how they advertised.

• Director of Development Valerie Hans said 16 blighted properties remain standing that are scheduled to be demolished under Licking County’s Neighborhood Stabilization Program. She hopes they will be torn down “within the next month or two.” The village had to reduce the number of uninhabitable struc- tures it planned to tear down from 76 to roughly 30 after deadlines to obligate funding weren’t met.

Previously, Katie Sabatino, spokesperson for the Ohio Department of Development, said that Licking County was originally awarded $1,062,074 in December 2008 for the Neighborhood Stabilization Program with the requirement that all of the funding would be obligated to demolition projects by June 30. “That didn’t happen,” she said.

Hans said Monday that there may be another round of funding available to continue demolishing uninhabitable structures. She said she may know about availability “within the next couple months.”