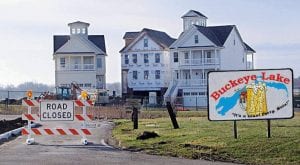 A temporary sign at the North Shore boat ramp is the only outward sign of Buckeye Lake’s sale. The reconstructed entrance will accommodate MIG’s new admission centre. Beacon photo illustration by Kendra Edinger.

Macquarie makes up onehalf of the consortium that controls the lease to the Indiana Toll Road and the Chicago Skyway, which was the first existing toll road to be leased to a private firm in the United States. The consortium took over the toll roads in January 2006. MIG is also part of a group currently negotiating the lease/purchase of Alligator Alley (last section of I-75) in Florida.

“We simply needed the money,” explained Dan East, chief of ODNR’s Division of Parks. “We’ve got 74 state parks. With the new budget cuts, we were faced with slowly bleeding to death or giving up one to save the rest.”

Rep. Jay Hottinger, RNewark and a member of the Controlling Board, said it was a sad day for Ohio. He likened the decision to an amputation. “Sometimes you have to give up a leg to save the rest of the body,” he explained. “That’s what we were faced with here.” 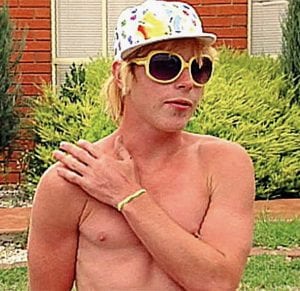 Macquarie is paying the State of Ohio up to $990 million for Ohio’s oldest state park. For tax reasons, the deal is structured as a ten year lease at $99 million per year with a $1 purchase price in 2019. “We tried to get a billion dollars, but the numbers just wouldn’t work for MIG,” State Budget Director J. Parti Sabety said. “We drove a hard bargain.” Proceeds will be split 50:50 between the state’s general fund where it can be spent on nearly anything, and the State Parks Fund in ODNR’s budget.

East defended the deal by noting that Buckeye Lake State Park lacks many of the amenities typically found at other state parks. “Buckeye Lake doesn’t have camping, cabins, a resort lodge or golf,” East said. “Our strategy going forward is based on resort parks like Deer Creek. Plus we were facing a huge liability, perhaps up to $50 million to replace the 4.5 mile long dam. That’s now MIG’s responsibility. It came down to dollars and cents.” East added that the Parks and Recreation Advisory Council signed off on the deal. 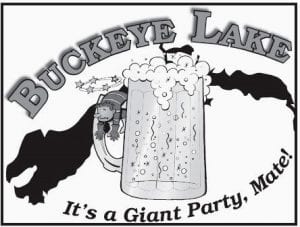 “We understand that some residents are going to have hard time accepting our decision,” East said. “So everyone living within a mile of the Buckeye Lake shoreline is eligible to become a life member of our State Parks VIP program.” VIPs get a special identification card that gives them 10-15 percent discounts on most goods and services plus priority reservations at the remaining 73 Ohio State Parks. A lifetime VIP pass normally costs $99, but eligible residents will only have to pay a $9.95 processing fee. “We’ll also throw in a VIP t-shirt,” East said. VIP applications will be available at area post offices in a few weeks.

Just a few residents caught wind of the deal. “I’m dismayed, but not shocked,” Tory Wolfe said. “I thought I smelled a rat back in December when Tim (Buckeye Lake State Park Manager Tim Waln) was promoted and not replaced.”

Merv Bartholow, president of the Buckeye Lake Area Civic Association, thought something might be up, but didn’t expect an outright sale. “I’m really concerned about keeping the lake affordable,” he said. “We’ve got to come up with a strategy that balances private ownership with public interest.”

Not everyone is upset. Some North Bank and West Bank residents were happy to learn that the sidewalk in front of their homes will no longer be open to the public. “I’m tired of looking out my windows and seeing any Tom, Dick or Harry just inches from my house,” one North Banker said. Access will soon be limited to waterfront residents and paid guests, both readily identified by their required courtesy badges.

Here’s what MIG is getting for its $990 million:

In addition to the real estate, the state extended several “enhancements” to MIG to justify the $990 million sale price. State law was very quietly amended to allow MIG to charge waterfront property owners a frontage assessment. The fee for developed property on the main lake is limited to $10 per waterfront foot per year for the first five years, then $20 per foot for the next five years. Undeveloped main lake frontage have $4 and $8 limits respectively over the same time period. Developed and undeveloped canal waterfront is assessed at $6/$12 per foot and $2.40/$4.80 respectively. All limits expire after 10 years. Unpaid assessments become liens on the property and MIG can initiate foreclosure actions once unpaid assessments exceed $10,000.

Another enhancement is the issuance of a Community Entertainment District liquor permit with special conditions. The permit covers all the leased/purchased property. In other words, MIG may sell beer, wine and spirituous liquor by the glass anywhere on Buckeye Lake or its adjacent properties. The special conditions include extended service hours which are 6 a.m. to 4 a.m. daily, with Sunday’s restart time pushed back to 9 a.m.

That permit, particularly the extended service hours, puts current permit holders at a considerable disadvantage. “It’s going to be tough to compete with all their outlets,” local bar manager Pablo complained. “The additional operating hours will make it next to impossible.”

MIG Managing Director Lachlan Hamilton and his deputy, Jackson Lucas outlined their vision for Buckeye Lake. “Buckeye Lake used to be called ‘The Playground of Ohio,'” Hamilton said. “We plan to restore that reputation and build on it. We want to be the party capital of the Midwest.”

Infamous “Party Boy” Corey Delaney is promoting Buckeye Lake at colleges, Spring Break sites and bars. The Melbourne teenager threw a party while his parents were gone and 500 showed up, terrorizing neighbors and ultimately battling with police. YouTube videos turned Delaney and his trademark giant sunglasses into a worldwide party celebrity.

“It’s really more than just a giant party,” Hamilton insisted. He acknowledged that owning the lake provides some unique opportunities. “We get to make our own rules,” he explained. “It’s like Australian rules football.”

Boaters will be able to enjoy adult beverages on the lake. In fact, floating bars will accommodate about any refreshment request. Carry-in alcoholic beverages are prohibited. But, drunken boat captains won’t be tolerated. ‘Water safety monitors’ will patrol the lake and drunken captains will lose their privileges for the day.

Ohio boat and dock decals, boater education cards and fishing licenses are no longer required. Day-trip boaters will pay a flat fee – expected to be $19.95 except for major holidays – to use the boat ramps and boat all day. Multiday and season long passes will be available. Waterfront property owners qualify for a discounted season pass and their docks fees are expected to be about $650 per dock per year.

Bank fishing is a flat $4.95 per day per person with children 12 and under free. Again multi-day and season passes will be offered. Fishing from a boat is $2.95 per person in addition to the daily boat fee.

“It sounds like it’s going to be a giant pay lake,” Buckeye Lake activist Peggy Wells complained. “I’m not sure I want to live here if it’s a constant party and there is a price on everything.”

Lucas has big plans to make fishing more exciting. Based on the former ‘Big Bud’ fishing contests, specially tagged fish will be released in the lake. “We’ll certainly have some $10,000 contests, maybe even a $100,000 fish,” Lucas said. Contests are limited to a specific amount of time, maybe a long weekend or a week or two. Bio-dissolvable tags will be placed on the contest fish. Special fishing fees apply to all fishermen during contests. It might be as low as $10.95 for a $10,000 three- day weekend contest and up to $49.95 for a two-week $100,000 contest. “It will be a real skill game,” Lucas said.

Hamilton has some bad news for Millersport and Thornville residents. Both communities have sewage treatment plants that discharge effluent into the lake. Now that MIG owns the lake, both communities must pay for the privilege. “The fees will be based on the NPDES reports that the plants have filed with Ohio EPA in the last two years,” Hamilton said. “Thornville has a newer plant with tighter Ohio EPA requirements. That means their discharge is cleaner and they’ll pay less than Millersport.” Hamiton expects the new fees will cost each Thornville sewer customer about $15 more a month, while Millersport customers could pay about $25-30 more a month.

Millersport is planning to upgrade its plant, but Mayor Dean Severance said the new fee might prompt Millersport to connect to the Buckeye Lake Sewer District which discharges into the South Fork of the Licking River. The sewer district won’t totally escape MIG’s fees since it has a collection pipe going under the lake. The fee for that pipe might amount to a buck or so a month for each customer.

There is good news for traditional fireworks fans. “We know how you Yanks like fireworks on the 4th of July,” Lucas said. “We’ll be putting on a great show over the lake on July 4.” Day trippers will pay special holiday rates for the day.

“We want to appeal to everyone,” Lucas emphasized. Parts of the lake haven’t been dredged for years and MIG plans to make lemonade from lemons. “Dredged material will be used to create some new islands that will have specific themes. “One will be clothing optional,” he said. “In the nuddy is growing in popularity.” That plan might revive the NOPE group – Neighbors Opposed to People Exposed. Another new island will probably be LGBT friendly. “We want everyone to feel comfortable at Buckeye Lake,” Lucas added.

A resort hotel is in the future for the Liebs Island property and tent camping areas will appear this summer at the North Shore, Fairfield Beach and Brooks Park areas. Visitors who party too hard, can sleep it off at special “nod-off” areas around the lake. Crane Lake will probably be turned into the world’s largest and fastest personal watercraft dodgem attraction. “Players will be able to build up some speed and send each other flying,” Lucas explained.

“We want to be good neighbors,” Hamilton stressed. He expects that more than 150 new jobs will be created – everything from accountants to water safety monitors. Plus residents will be living at the “Party Capital of the MidWest” year round.

Hamilton and Lucas are sharing their plans and visions in more detail at a series of meet-up sessions with residents. The first one is set for 7 p.m. on Wednesday, April 1 in the Lakewood Junior High School auditorium. Lucas promises complimentary Bud Light on tap and some more fun surprises. “Come on out,” he said. “We’ll make it a party.”