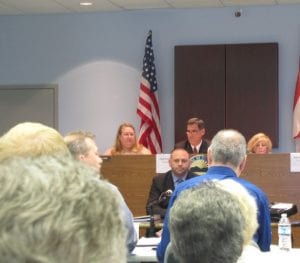 BUCKEYE LAKE – Village council members started their special meeting to hear Mayor Peggy A. Wells’ charges against Police Chief Jimmy Hanzey an hour early Monday evening in hopes the hearing would be wrapped up before midnight.

Their estimate turned out to be about four hours too optimistic. The hearing, conducted by Newark attorney W. Prentice Snow, wrapped up around 1:30 a.m. After a break, council members went into an executive session with Snow to make their decision. They emerged about 3:45 a.m. with a 5-2 decision to terminate Hanzey. That vote met the two-thirds affirmative vote of all members elected requirement in ORC 737.171.

Wells filed 22 administrative counts against Hanzey with the village clerk as required by state law on April 25. The counts allege Hanzey is guilty of incompetency, dishonesty, insubordination, neglect of duty and other acts of misfeasance, malfeasance or non-feasance. The charges stem from an internal affairs investigation conducted by the Pataskala Division of Police.

Council members unanimously agreed at their April 30 meeting to hire Snow to conduct the hearing and Newark attorney W. Doug Lowe to present Wells’ charges. While Snow emphasized that the hearing was not a trial, witnesses were sworn in and were not permitted to listen to testimony.

He also maintained a trial like atmosphere and twice asked council member Bob Masone MD about his use of electronic devices during the hearing. The first time Masone said he was using his smartphone to take notes. When Masone brought out a laptop with his phone and was questioned again by Snow, Masone said he was transferring his notes to his laptop. Snow asked him to stick to one device.

The lead investigator, Detective Sgt. Gary Smith of the Pataskala Division of Police, was the first witness. He acknowledged that he knew Hanzey, adding, “I liked Jimmy.”

Lowe’s questions to Smith, quickly established that Hanzey had no equipment (firearm, flashlight or any identifying uniform) when he and now former Police Officer Jeff Vermaaten responded to a call for help to Hanzey’s cell phone. Hanzey was on medical leave at the time, just a day after most of his ring finger on his dominant hand had been amputated. Wells had spoken with him earlier in the day, telling him that he was still on medical leave until she and the law director had an opportunity to review his physician’s release for light duty and liability issues.

Under Lowe’s questioning, Smith said he too had been placed on light duty and it didn’t include responding to possible felony calls or any calls for service. Lowe also established via Smith that Hanzey had the borrowed firearm (from on-duty Officer Steve Ritter) in his left hand with his finger on the trigger when he entered the dark trailer. Smith said having a finger on the trigger in this instance is not proper procedure.

A total of 15 witnesses were heard during the hearing. Wells’ witnesses, in addition to Smith, were:

• Eileen Scarrett-Dudgon of Medbill. The firm processes billing for Buckeye Lake Fire Department EMS transports. She testified that the village’s health insurance provider had paid Hanzey directly for three EMS transports provided by the Buckeye Lake Department. She recounted her frustration in getting him to turn over the payments to the village. Hanzey owes the village about $2,200.

Hanzey was represented by Harbor Hills attorney Larry Arnold. His witnesses were:

• Former Mayor Clay Carroll who acknowledged that he let Hanzey work from home;

• Former Mayor Frank Foster who acknowledged that he had once suggested crediting an auxiliary officer with 16 hours per month in exchange for some training;

• The niece that called Hanzey’s cell phone about her aunt claiming that two men had broken into her Leisure Village trailer and that one was bleeding to death after being shot;

• The Leisure Village complainant’s son; and

The hearing was conducted pursuant to Ohio Revised Code Section 737.171. It reads:

737.171 Procedure for removal of village marshal.

Except as provided in section 737.162 of the Revised Code, if the mayor of a village has reason to believe that a duly appointed marshal of the village has been guilty of incompetency, inefficiency, dishonesty, drunkenness, immoral conduct, insubordination, discourteous treatment of the public, neglect of duty, or any other acts of misfeasance, malfeasance, or non-feasance in the performance of the marshal’s official duty, the mayor shall file with the legislative authority of the village written charges against that person setting forth in detail the reason for the charges, and immediately shall serve a true copy of the charges upon the person against whom they are made.

Charges filed under this section shall be heard at the next regular meeting of the legislative authority occurring not less than five days after the date those charges have been served on the person against whom they are made. The person against whom those charges are filed may appear in person and by counsel at the hearing, examine all witnesses, and answer all charges against that person.

Action of the legislative authority removing or suspending the accused from office requires the affirmative vote of two-thirds of all members elected to it.

Snow had prepared a four-page form to record council members’ decisions. Nine charges were listed separately, each with space for a total of seven signatures.

2. Chief James Hanzey is found to have acted incompetently in the fulfillment of his duties as Chief. Four council members agreed: French, Geiger, Wolfe and Zwissler.

3. Chief Hanzey is found to have acted inefficiently in the fulfillment of his duties as Chief. Five council members agreed: French, Geiger, Poorman, Wolfe and Zwissler. Bob Masone M.D. had originally signed as well, but then crossed out his signature.

4. Chief Hanzey is found to have committed Misfeasance in the fulfillment of his duties as Chief. Four members agreed: French, Geiger, Wolfe and Zwissler.

5. Chief Hanzey is found to have neglected his duties as Chief. Five members agreed: French, Geiger, Poorman, Wolfe and Zwissler.

6. Chief Hanzey is found to have acted dishonestly in the fulfillment of his duties as Chief. The number is crossed out and there are no signatures.

7. Chief Hansy is found to have committed non-feasance in the fulfillment of his duties as Chief. Three members signed: French, Wolfe and Zwissler.

8. Chief Hanzey is found to have engaged in immoral conduct in the fulfillment of his duties as Chief. No signatures.

9. Chief Hanzey is found to have committed Malfeasance in the fulfillment of his duties as Chief. Geiger and Zwissler agreed.

ORC 737.171 gives council members three options: dismiss the charges, suspend the chief for not more than 60 days or remove the chief from office. Five members agreed that he should be removed from office: French, Geiger, Poorman, Wolfe and Zwissler. Their decision was effective immediately.

Masone and council member Arletta Ruton did not believe that Hanzey committed any of the nine listed offenses. Hanzey has 10 days to file an appeal on “questions of law and fact” with the Licking County Court of Common Pleas.