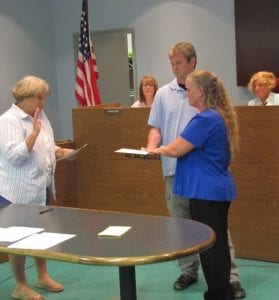 BUCKEYE LAKE – Buckeye Lake now has a new police chief, two months after Village Council members terminated former Police Chief Jimmy Hanzey for insubordination, acting inefficiently in the fulfillment of his duties as chief, and neglecting his duties as chief.

Mayor Peggy A. Wells filed 22 administrative charges against Hanzey, following an extensive internal investigation conducted by the Pataskala Division of Police. A super majority, at least five out of seven council members, had to agree with at least one of Wells’ charges. Five agreed on three charges and four members agreed on two additional charges.

Charles said three candidates out of 19 applications were interviewed. “Buckeye Lake is going to be great again,” he said. Charles added, “We weren’t influenced by anyone. We wanted the very best candidate.”

That candidate is Vicki L. Wardlow of Pickerington. Wells appointed Wardlow chief and administered the oath of office to her.

Wardlow said she started her law enforcement career at age 15 as an Explorer in a law enforcement post. She received her first commission at age 18. She started out as an auxiliary deputy sheriff with the Van Wert County Sheriff’s Office. For three years, she worked as an undercover narcotics investigator working in high schools and factories in Auglaize, Mercer and Perry counties. She was a dispatcher, patrol deputy sheriff and then patrol sergeant at the Perry County Sheriff’s Office. Later she served nearly seven years (11/03 – 5/10) as chief of police in the Village of Junction City in Perry County.

She also has 13 years experience as an instructor for the Ohio Basic Police Academy curricuwww. lum at Eastland-Fairfield Adult Education Center. She maintains her commission as an auxiliary officer with the Village of South Bloomfield Police Department.

Wardlow’s husband is a sergeant with the Whitehall Division of Police and handles the department’s bomb-sniffing dog.

Wardlow said she found the job of rebuilding the department “exciting” and asked residents to be patient. She said she would be transparent and is anxious to meet residents.

In other business Monday night, council member Arletta Ruton continued her efforts to keep the village-owned drive-thru lease out of the hands of local residents, John and Deb Julian. The couple was the only prospective lessee to respond to the village’s solicitation offering a maximum four-year lease. Council members approved a two-year lease at $1,200 per month by a 4-3 vote at their June 25 meeting.

Ruton continues to claim that a prospective buyer brought to council early this year by the previous operator was “made to jump though hoops” and unfairly treated. That prospective operator insisted on the right to a six-year lease when some council members thought four years was too long. He walked away when he couldn’t get the six year commitment. At council’s June 25 meeting, Finance Committee chair and council member Tom Wolfe refuted Ruton’s claim that the first prospective operator had provided far more financial information than the Julians. He said that party didn’t provide any financial information, adding that the Julians’ information was sufficient.

Monday night, Ruton said a neighbor of the Julians had given her information about a mechanic’s lein placed on their new home by a contractor. She wanted to know if this had been investigated and why it wasn’t “brought forth.” Council President Kitty Zwissler said the lein was about failure to do some work properly. Council member John Geiger said the same contractor had built his home and he had had some issues about work being done.

Ruton moved to rescind the ordinance approving the lease until “these issues are resolved.” Council member Bob Masone MD seconded the motion. The motion failed by a 4-3 vote with council members Doug Poorman DVM, Masone and Ruton voting “yes.”

Planning Commission Chair Karen Cookston and Ruton also claimed that some of their comments at the last council meeting were left out of the minutes. Both were asked to submit the comments to Council Clerk Valerie Hans. Several of Cookston’s comments were made just as the meeting was adjourning.

In her report, Wells brought up the issue of the upcoming Saturday night, August 11, Mopar cruise through Buckeye Lake. Three years ago, the unofficial cruise moved down Ohio 79 from Heath to Buckeye Lake. The event has attracted hundreds of cars, some associated with the Mopar Nationals event at National Trail Raceway and some not, that are driven up and down Ohio 79 for three to four hours Saturday evening. Many of the drivers, to the delight of hundreds of spectators that line much of the roadway in the village, gun their engines, squeal their tires and smoke their tires in burn-outs. Other residents are disgusted with the noise, tire smoke and heavy traffic.

Earlier this year, Wells asked Masone’s Public Safety Committee to review the event and seeks ways to protect spectators and their children who are sometime literally inches away from hardto control vehicles doing burnouts. She asked Masone again last month.

Monday night, Masone said he had spoken with Mike Fornataro, former National Trail Raceway general manager and current board chair of Explore Licking County, who he said told him that Mopar Nationals is the county’s largest revenue producing event. Masone also told Wells that she couldn’t blame divots on Ohio 79 on the event due to the heavy construction traffic from the dam reconstruction project. Wells said she welcomes the Mopar event at National Trail and the revenue it brings area businesses and the county. Her concern is that the burn-outs appear to be out of control and that someone watching is going to be seriously injured or killed by an out-of-control vehicle. Wells also questioned how many of the cruising drivers are actually coming to the Mopar event compared to area drivers taking advantage of the one-night opportunity to get away with tire squealing and burn-outs.

After Masone said he wasn’t going to do anything that might jeopardize Mopar, Wells said she would consult with the fire chief, new police chief and other law enforcement officials to see what could be done to protect spectators and minimize the impact of noise and smoke on nearby residents.

Zwissler reminded everyone that residents, Alex and Lori Fischer have put up a $10,000 challenge grant to benefit the new Harbor Community Center. That means the couple will donate a dollar for every dollar donated up to $10,000. Ruton had announced earlier that the firefighters association is sponsoring a spaghetti dinner from 4 – 7 p.m. on Saturday, August 4, to benefit the new center. Take-out and delivery will be available.