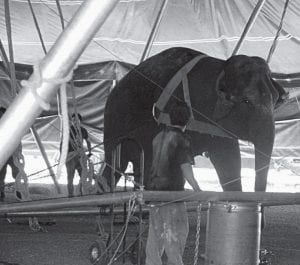 An elephant helps erect the Big Top for the Kelly Miller Circus last Thursday. The tent was set up behind Albanese’s IGA. The Buckeye Lake Fire Fighters Association sponsors the circus’ visit every two years. Beacon photo by Scott Rawdon.

BUCKEYE LAKE – Songwriter Bobby Russell wrote about “The Night the Lights Went out in Georgia” in 1973. The lights may be going out in Buckeye Lake Village June 30, 2009.

Tuesday night, Buckeye Lake Village Council voted to turn off the village’s streetlights June 30 because a levy intended to pay for the street lights’ operation failed in May. Council regularly meets on Monday nights, but met Tuesday due to the Memorial Day holiday.

“The reality is, we have no choice,” said Foster, adding that it will become a real safety issue.

Council member Donna Thompson predicted that crime victims will blame it on the lack of street lighting. “I feel guilty for the ones who voted for the levy,” she said.

“Let it be noted that this was a tough decision,” said council member Shelly Small.

In other council news:

• Foster said he expects construction on the Landings at Maple Bay to resume in roughly four weeks. Several weeks ago Thomas Wardlow, a partner in the Landings project, said he expects construction to resume late spring or this summer. “It’s not frozen, and it’s not abandoned,” he said. Wardlow said the project appears inactive because the developer, Winding Road Ventures, Inc. of Troy Michigan, is securing funding for the next phase of development, which is the project’s extensive harbor and canal system, including a new bridge for Hunts Landing Road.

Wardlow said there are “significant costs” associated with the harbor, canal, and bridge, and organizing funding is a long process. But, he expects funding to be secured soon, and the Landings will sponsor an event to announce when construction resumes on the harbor.

Wardlow said the harbor and other water-related features must be complete before homes can be delivered. He said no one has yet to purchase a home outright, although several people have made deposits. Wardlow said the Landings features builder Epcon’s Canterbury model, which is the best selling ranch condo in the US. The landings will also premier the new Nantucket design. He said the project’s clubhouse would be built while the harbor is constructed.

According to the Licking County Treasurer’s Office, the Landings has paid all its taxes and Licking County Water and Wastewater Director Kevin Eby said the Landings is current on its financial obligations for the 100 water taps the county is providing the development.

Hunts Landing LLC, including Frank Cipriano, president of Parkmead Corporation and Mark Zenik, member of ZDM Properties, LTD, purchased the 118-acre Bounds Farm Nov. 2, 2006 for $1.35 million to be developed into The Landings at Maple Bay and The Residences at Maple Bay.

The Landings at Maple Bay is a 78-unit condominium development located on the southwest side of Hunts Landing Road. It includes a man-made canal, a marina with boat slips, a boat storage area, and a clubhouse with a pool.

• Foster believes Leisure Village trailer park owners are “strongly considering” tying onto the village’s pending public water distribution system. The Village of Millersport will supply bulk water to the Village of Buckeye Lake. “It would be good for their residents and for (Buckeye Lake),” he said. Recently, the Buckeye Lake Estates trailer park agreed to connet to the system.

Director of Development Valerie Hans said she’s had interest from developers on two large parcels of village property, although she wasn’t specific. The developers are eager to know when the groundbreaking will be, she said.

• Council approved purchase of a NetFlex electronic device that will automatically transmit water meter data from individual water meters to a village computer. The device costs about $156,000, but Foster said it would save the village money in the long run because it eliminates personnel costs.

• Mosquito spraying begins at 3 a.m. on Wednesday June 3 and continues each Wednesday through the summer, weather permitting. The spraying is at 3 a.m. because last year a resident complained that the Union Township employee operating the equipment sprayed her daughter and young grandchild during the early evening hours. After she complained, an Ohio Department of Agriculture investigation determined Union Township committed three pesticide violations – the township misused pesticide, operated application equipment negligently, and failed to provide proper direct supervision to a trained service person. The applicator allowed the pesticide to contact skin and failed to turn off the applicator when approaching pedestrians. The late night start time, which began late last summer, will minimize contact with any one.

• Council approved the first part of a tree ordinance Tuesday night. Small said her only objection was to a provision she believed allowed the village to force residents to take down dead or diseased trees on private property.

Foster said the rule only applies to dead and diseased trees that may fall onto a public rightof way and endanger someone. He said that legislation currently exists, but the ordinance would permit a village tree committee to decide which trees pose a threat.

• Foster congratulated the Buckeye Lake Fire Department for another successful circus visit May 21. The fire department sponsors visits from the Kelly Miller Circus every other year.

Zoning Inspector Rod Riley said this year’s turnout was excellent and an improvement over the last time the circus came to town. “It turned out really good this year,” he said.

• Council member Jim Bartoe said some village properties have extremely high grass, which is a breeding ground for mosquitoes and poses a health risk to the community. “Some porches are disappearing,” he said. Often these properties are empty and their owners live out of town.

• Lindsey Brighton was appointed to the Parks and Recreation Committee.