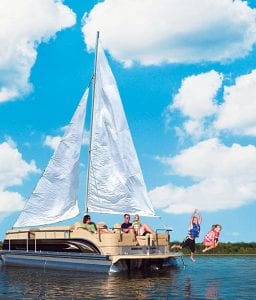 COLUMBUS – No, it is not an early season algae bloom.

Buckeye Lake will become one of four pilot projects nationwide for US EPA’s Sustainable Parks Initiative, part of its Green Communities Program. The other parks are in California, Massachusetts and Oregon.

“Recreation is an integral element of a sustainable community,” US EPA Administrator Lisa Jackson said in a press release announcing Buckeye Lake’s selection. “A successful Green Community must address the entire bandwidth of community activities.”

“We’re proud to join such an exclusive group,” Governor Ted Strickland and ODNR Director Sean Logan said in a joint statement. “We want to thank President Obama and US EPA Administrator Jackson for including Ohio in this innovative approach in addressing critical sustainability and energy security issues.” Strickland and Logan also brought home a $16.9 million check in American Recovery and Reinvestment Act of 2009 funds. Most of those stimulus funds will be used to expand ODNR’s budding Streets to Parks program that expands opportunities for urban residents to enjoy Ohio’s State Parks.

The first 500 boat owners obtaining their horsepower declaration certification will receive a 210 denier nylon Green Communities flag courtesy of US EPA to fly with pride on their boat. Flags are regularly $19.95 each. Courtesy image.

“US EPA requires each Sustainable Park Initiative to be self-funded,” Logan said, anticipating questions from Buckeye Lake residents and visitors about why very little of the $16.9 million windfall will be spent at Buckeye Lake. “We would love to spend some of it to upgrade Buckeye Lake facilities, but our hands are tied by the feds.”

Logan assured The Beacon that at least 80 percent of the fee income generated by SPI will be used for program initiatives at Buckeye Lake. The rest will reimburse ODNR for its administrative and oversight costs.

“SPI will put Buckeye Lake residents and visitors on the cutting edge to transform our current reliance on carbon-based energy to the emerging matrix of alternative technologies for a sustainable future,” Logan explained. “Buckeye Lake will be well ahead of the curve. You will be our laboratory to see what works and what doesn’t.” 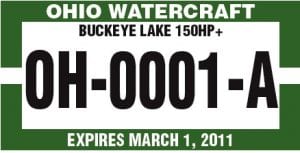 Buckeye Lake horsepower declaration certificates will be green. Two stickers will be provided for placement below the triennial registration stickers.

Buckeye Lake was selected for the SPI program for a couple of reasons, Logan explained. First, it is unique among most state parks since many park users literally live at or very close to the park. “It’s already an integral part of your community,” he said. “Many residents moved into the community because the park is here.” Second, Buckeye Lake’s proximity to Columbus makes it easy for ODNR to administer and monitor the multi-faceted program, plus it’s a quick drive from Ohio’s largest urban center.

“But I will tell you,” Logan told The Beacon. “A sustainable and energy secure future won’t include large carbon-fueled boat engines.” ‘Large’ to ODNR apparently means any carbonfuel engine over 9.9 horsepower. “That’s the maximum on our limited horsepower lakes G reen and these motors are readily

Anticipating the rage from Buckeye Lake boat owners, many with 50 – 150 HP motors on their pontoons, Waln said the limit will be phased in over the next four years. Boat owners will be able to continue to use their larger motors for the next four years, but must pay increasing carbon offset fees for the privilege.

“It’s like Al Gore and his energy-hogging mansion in Tennessee,” Waln explained. “He might have used 12 times as much energy as the typical home, but he purchased carbon credits to offset it. That’s how we’ll do it here.”

each boat on Buckeye Lake will be required to display a special horsepower declaration sticker as evidence offset fees have been paid. Owners bringing boats to the lake by trailer must purchase an appropriate horsepower certificate good for three days. That sticker will cost 10 percent of the appropriate annual offset fee plus a $4.75 administrative fee. Fines for failure to display the special sticker will be steep. The first offense is $150 with the fine increasing by $150 each time for subsequent violations. Boats may be impounded if fines are not timely paid.

“It’s not all stick and no carrot,” Waln insisted. Some of the offset fee income will be used to subsidize alternative energy modifications. For example, the owner of a pontoon with a 100 HP motor could receive up to $3,500 to convert to sail. “When you take that grant and add the proceeds from selling your 150 HP motor, you are going to make money,” Waln said. He expects the typical pontoon conversion to sail will cost about $4,000 including a spinnaker.

Dave Levacy of Buckeye Lake Marina is skeptical. “I’ve seen a pontail (sail conversion) and it works, but it will be a lot more work to cruise around the lake after dinner. One thing for sure, nobody is going to waterski or tube behind a pontail.” He believes the offset fees will basically kill trailering. “The only people bringing a boat out here on a trailer will be the low horsepower fishermen,” Levacy said. He’s concerned whether any of the four marine service businesses will be able to survive, particularly when the 9.9 HP limit is final after four years. “Ann and I may have to go into the cookie business,” he added.

Waln said $2,500 to $10,000 grants will be available to convert existing carbon-fueled boats to battery power. Josh Fisher at Fisher’s Marina is looking at adapting the upcoming Chevrolet Volt’s battery-operated engine to a pontoon. “General Motors says the Volt will be good for 40 miles off the batteries alone,” he noted. “The question is how much could we get on the water where the resistance will be much more than a car rolling on rubber tires. Maybe we could use a modified 9.9 HP motor to recharge or supplement the battery power.” He too doesn’t see how anyone could tube behind a battery-operated pontoon.

Battery conversion grants are automatically increased by 30 percent if the batteries will be recharged using alternative energy. That’s got both Eddie Fisher and Levacy looking at putting up solar arrays or a wind turbine to power recharging docks. “I know it sounds ridiculous,” Levacy said. “I just can’t believe we are even talking about battery-powered boats.”

SPI isn’t just limited to gasoline boat engines. Some major changes are on the way for any food service operation or state liquor permit holder that’s located within 1,000 yards of the Buckeye Lake shore line. That includes everything in Millersport and most everything in Buckeye Lake Village.

“US EPA representatives noticed an unacceptably high use of disposals during a partnering lunch with Ohio officials at a lakeside restaurant,” Logan explained. “We’ve got to remember that achieving sustainability means we have to make major changes in how we live. A quick check found that most lakeside food service operations use far more disposables than average. That’s got to change.”

And it’s just not plastic utensils and paper or foam plates. Bottled or canned beer creates far more waste than draught beer. In fact, one stainless steel Corny keg lasts for years and replaces at least 43,000 bottles or cans. “SPI status means we have to set the example,” Logan said. By June 1, the affected food service operations and liquor control licensees will only be able to use disposable napkins, straws and food basket liners in-house. There are no limitations on carryout business. Liquor permit holders must dispense 90 percent of their beer as draught in reusable glasses. Mixed drinks costing $2 or more must be served in reusable glasses.

Once again, there will be some help to offset the conversion costs, using revenue from the boat engine offset fees. Liquor permitees will be eligible for a $500 grant per beer tap up to a maximum of 10 new taps. Food service operators can receive grants based on seating capacity up to a maximum of $15,000 to purchase reusable tableware and add/upgrade dish-washing equipment. “We don’t want this to be a burden,” Logan explained.

The next step for Strickland and Logan is to name a sustainability czar for Buckeye Lake and ultimately other areas of the state as the program spreads. “Now that health care is done, President Obama is going to focus on sustainability and energy security,” Strickland said. “We will be right on the front lines, leading the way to a better future for our children.” However, the czar appointment may be delayed until after the November elections when a larger pool of applicants may be available.