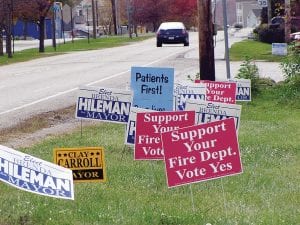 Buckeye Lake’s fire levy was renewed by a 233 to 192 vote, including Fairfield County voters, in unofficial results from Tuesday’s election.

“I’m really happy about that,” said Buckeye Lake Mayor Rick Baker. “It’s good that people could see the value of the fire department. We’ve spent a lot of time on it in the last year.” If the levy failed, the department may have become strictly volunteer.

“It was a huge success in our eyes,” said Buckeye Lake Village Council President Charlene Hayden. “ Thank goodness, there are 231 people in the village who see the importance of having a fire department in close proximity. Those 231 votes help to stabilize our property values, help to maintain our Insurance Service Organization rating, give the village a chance for business growth, and provide our village residents with good safety services for the next five years.” 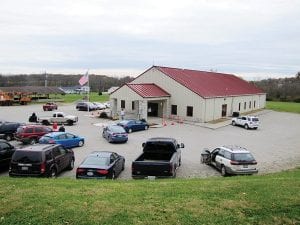 Last November, voters rejected the same measure by a 509-412 vote.

Union Township voters, including Village of Hebron voters, were feeling charitable toward fire service as well, and approved an additional 1.5-mill fire levy by a 691 to 585 tally. Trustees are paying Hebron $420,000 for the current 2013 contract, after paying roughly $625,000 in 2012. The Hebron Fire Department services the area of the township south of the railroad. The township’s typical 60 percent share of operating expenses was estimated at $645,000 for 2013. Before the levy passed, trustees again offered $420,000 for the 2014 contract because the township had no additional income from the previous year. But, the trustees said they would be willing to reopen negotiations if the levy were approved and have since offered to do so. Union Township also contracts with the Granville Township Fire Department for $80,000 per year to service the area north of the railroad. The 1.5 mill fire levy will raise about $237,000 a year.

“Obviously, we need to continue to work on our services,” said Carroll, who would like to see the village continue to improve its fire department, in addition to the village’s other departments. He would also like more people from the community to involve themselves in the workings of the village and to work together doing so. “We have so many people in the community with ( diverse) backgrounds and knowledge,” said Carroll. He hopes council members can “find a good working ground” and work together toward finding solutions and not resign to bickering among themselves.

Carroll said he “applauds people on all sides” of the campaign for mayor and appreciates all candidates and their supporters’ desire to improve the village.

Voters approved all of Buckeye Lake’s proposed amendments to its charter:

• Section 6.01 – Allows the Mayor, with the consent of council, to combine or establish new departments or divisions. It was approved 241 to 173.

• Section 6.02 – The village fiscal officer need not be an elector or resident but must be qualified by training and/or experience in matters of accounting, financial reporting and management and other fiscal or related matters. Approved 227-190.

• Section 6.03 – The position of the Director of Public works does not need to be an elector of the village but should be qualified by training or experience in matters pertaining to the streets and roads, construction and repair, and the administration and operation of other public works, improvements, buildings and utilities. Approved 226 to 190.

• Section 6.05 – The Development Director need not be an elector or resident of the Village but should be qualified for the position by training or experience in matters pertaining to economic development, planning, housing, neighborhood services, land management and building services. Approved 222 to 190.

• Section 7.01 – Planning and Zoning Commission – the change allows for three of its seven members to be non-electors. Non-electors must be reconfirmed on an annual basis. Approved 257 to 151.

• Section 7.03 – Parks and Recreation Commission – the change allows two of the members to be non-electors. Nonelectors must be reconfirmed on an annual basis. Approved 253 to 160.

“We feel the first four changes will give us more flexibility for major positions in the office by allowing one person to do multiple tasks,” said Hayden. “It makes a lot more sense than having so many department heads for a small village. It will also save the village money

Hayden said for the last two changes, adding non-electors who have the appropriate experience to be on a planning and zoning commission or a parks and recreation commission will help fill positions on those commissions with experienced and qualified people who can contribute in a positive manner.

There were three candidates for three open positions on Buckeye Lake’s Village Council. Former council member Peggy Wells will return to council. Michelle McCormick has now been elected to a full term after being appointed last January to fill the rest of Kaye Hartman’s term. Write-in candidate Ken Owens was also elected to a full term. McCormick received 250 votes, Wells 175, and Owens 53.

In Hebron, three council incumbents and three write-in candidates were seeking four council seats. The late Pam DeVaul who passed away in August had been seeking reelection, prompting three candidates – former council member Erin Finkes, Amalia Hubbard and Tom Marietta – to file as write-in candidates. Jim Friend led the field with 222 votes followed by Scott Walters with 199 and Annelle Porter with 191. A total of 111 write-in ballots were cast but results were not yet available by Wednesday evening.

There was no drama on the Lakewood School Board as three incumbents sought reelection. Board President Judy White and members Trisha Good and Tim Phillips will each return for another term. White received 1,292 votes, Good 1,159, and Phillips 1,299.

Five candidates sought two trustee positions in Bowling Green Township. Benjamin Hupp led the field with 219 votes for a second term. Long-time trustee Daniel VanBuren was reelected with 213 votes. Mark Caudill led the challengers with 194 votes, followed by Dave Daubenmire with 165 and Jeffrey A. Baird with 83.

“There were lots of changes throughout the county,” said Black, who added that Bowman made a good showing for a first time run and he acknowledged Ours’ service as a trustee since 1988. “He really has worked hard for the township,” said Black. He anticipates the challenges facing his next term will be continuing to upgrade the township’s service facilities and negotiating an equitable fire contract with Hebron.

Prince thanked Ours for his 28 years of service. “He had an incredible run and it’s unlikely to be duplicated,” he said. Prince thanked voters for their support and pledged to put the focus on providing the best services possible to residents.

In the only contested countywide race, incumbent Marcia Phelps held off a strong challenge from Olivia Thorp for another term as Licking County Municipal Court Clerk. The vote tally was 15,908 to 14,110.