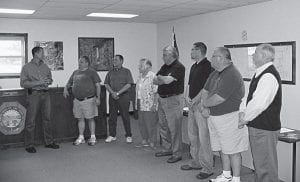 MILLERSPORT – There’s nothing wrong with your eyesight in Millersport. Nobody is seeing triple.

Thanks to an incredible deal, the Village of Millersport now has three identical police cruisers. “We got a fantastic deal on these cruisers,” Mayor Dean Severance said at Tuesday night’s council meeting.

All three are 2006 Ford Crown Victorias purchased for a total of $12,000 from the City of Gahanna. The Blue Book value is $4,000 each for that model, but these came fully equipped according to Police Captain John Shirk. Each has a LED light bar still under warranty worth about $3,000 each. They have low and high band police radios, computer docking stations, prisoner shields and radar units. Each radar unit is worth about $3,500. One cruiser has a complete video taping system with multiple microphones. Shirk estimated the total value at about $75,000.

The cruisers replace the village’s 2001 Ford Crown Victoria cruiser that was purchased used from the Ohio State Highway Patrol for about $6,000 with no equipment. Council members declared it surplus property Tuesday night and authorized village officials to use two on-line auction services to sell it. 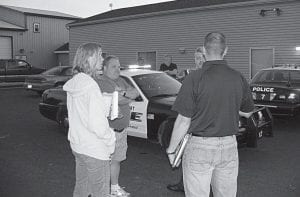 Shirk and Police Chief Randall Lewis said having more than one cruiser has multiple benefits. With one cruiser, the department basically shut down if it was out of service for maintenance. It also limited the village to one car patrols and made scheduling for reserve (non-paid) officers difficult.

“We can now start to actively recruit people,” Shirk said. There are a number of experienced police officers who have retired from larger departments who still want to retain their commissions, he explained. To do so, they must continue to log duty hours every month and do so on a volunteer basis. Now with three cruisers, Millersport makes it easier for them to get their time in and Millersport benefits from more police presence on the streets. “Now we can grow a bit,” Lewis added.

Shirk had more good news for council members. He has conditional approval from the State of Ohio for three new toughduty laptops for the cruisers at no cost.

Lewis said he’s already noticed the benefit of two cruisers on the road at the same time. He was on a traffic stop and noticed that a passing vehicle speeded up after it passed him. That driver quickly slowed down to the speed limit when he saw a second cruiser and then drove responsibly through the village.

“We purchased three cruisers for less than one-third the cost of a new cruiser,” Council member Charles Mesko concluded.

“It is exciting for both villages,” Severance added. Construction on the 12 inch diameter supply line to Buckeye Lake is expected to begin in three to four months. The route is MIllersport Road to Lakeside Road to Ohio 360 to Ohio 79 to Buckeye Lake Village limits. Ohio EPA has approved the plans, but the impact on some wooded wetlands along the route must be addressed.

Millersport received $250,000 in federal stimulus funds for the project and is borrowing another $250,000 for 20 years at zero interest. The Village of Buckeye Lake will receive $5 million in stimulus funds to construct its water distribution system.

Mayor’s assistant Vince Popo announced that the village swimming pool has been cleaned and is on track to open June 5. The drain covers will be replaced to met the new federal regulations. but the persistent leak hasn’t been found. Popo asked several times if there is support to spend $4,000 just to find the leak and heard none. Eastland Vocational School is building six starting blocks and swim meets will be returning with three home meets scheduled so far. GGC Engineers donated $500 to help fund pool operations this year.

Michael Carder of GGC Engineers said the water treatment plant general contractor – Crace Construction – will be getting an ultimatum to finish up the final punch list. He said there are concerns about the company’s future after its founder passed away last August. Carder assured council members that the holdback from the contractor’s final payment is sufficient to pay for the needed work. They just want to get it done.

In his report, Fire Chief Bill Yates briefly discussed last month’s payment from Walnut Township. “I contend it is only half what it should be,” he said. The same thing happened last year, leading to the joint council/trustees meeting He plans to contact trustees to get it resolved.

Severance announced that Sam’s Termite and Pest Control will again spray for mosquitoes this summer. The price is the same as last year. Spraying will be on the following Wednesday nights weather permitting – June 3 and 17; July 1, 15 & 29; and August 12 & 26. Additional spraying, funded by the Lions Club, will be done during Sweet Corn Festival week.

Popo, who also serves as a Walnut Township Local Schools board member, said three stadium light poles with lights have been offered free to the village. The high school stadium’s lights are being replaced as part of the all-weather track construction. “Take the lights and then we’ll decide what to do,” Council President Dave Levacy suggested. That’s the consensus and the lights could be used at the village’s baseball field to expand its use to some softball leagues. Yates, who helped install the lights in 1987 at the stadium, will help Popo get them moved. Levacy volunteered to shrink wrap the lights to protect them until they decide how to use them.

Severance tentatively set Fridays, June 5 and 12 as village clean-up days. If Big O Refuse agrees to two days, June 5 is the date for the portion of the village north of the canal. June 12 will be for the area south of the canal. If it turns out to be a one-day event, it will be June 5.

Severance had bad news on the county’s replacement of a South Bank bridge. The project requires that a village water line be relocated and it looks like the the $12,000 to $17,000 job will be the village’s responsibility since it appears that the waterline is in the county road right-of-way.

Severance suggested delaying any further discussion of the Lancaster Street parking ban between Mill and Main streets to a future meeting. He believes the only option will be to move the center line to gain three to four spaces on the west side of Lancaster Street. The ban won’t be enforced until signs are erected.

Council’s next regular meeting is set for 7 p.m. on Tuesday, June 9 at the municipal building.