Bring Him to justice! 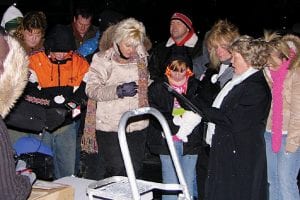 BUCKEYE LAKE- It was too cold and windy to light candles, but the spirit of a candlelight vigil remained strong Friday night. Pastor Beverly Myers of the local Tailgate Ministries held the vigil to raise awareness of former Buckeye Lake Village Council member John Cortez’ flight from justice and of the injustice brought to three minors with whom Cortez is charged with 23 counts of inappropriate sexual contact. Cortez, currently on the run from the law, is additionally charged with one count of supplying drugs to minors and one count of unlawfully possessing weapons. 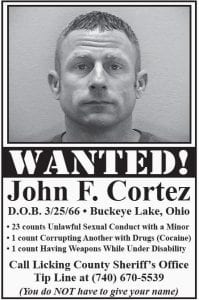 Nearly 40 people braved the elements to attend the vigil to convince Cortez, who may hear about the vigil through word of mouth or the throngs of reporters at the event, to turn himself in.

Licking County Sheriff Randy Thorp said previously that Cortez engaged in a pattern of illegal sexual conduct with three different juvenile boys between the ages of 13 and 16 during a 10 month period from September 2006 to July 2007. Cortez served on the Buckeye Lake Village Council from 2001 until August 2007, when he was expelled from the council for missing eight meetings within a year, which is grounds for expulsion according to the Buckeye Lake Village Charter.

Sgt. Tom Brown and Detective Chris Barbuto of the sheriff’s detective department attended the vigil, with Brown commenting that the search for Cortez is on going and the department is constantly following leads.

The sheriff’s department raided Cortez’ home Nov. 8, 2007 and indicted him on the charges Nov. 29, when Cortez fled.

The Friday night vigil took place in a parking lot across the street from the Banbury Cross Tea Room. The vigil was supposed to take place in front of the tearoom, but was changed at the last minute.

Myers explained, "Before closing for two months, the Banbury Cross Tea Room owner gave us permission to assemble for this vigil." It was her understanding that the use of the leased property was not restricted. "Noel Joyce, business partner of John Cortez, recently became owner of the property and has threatened arrest for trespassing if we meet as scheduled. We therefore moved this gathering across the street," she said. "This is the second time Mr. Joyce has tried to silence my voice through legal intimidation." Myers said that under Joyce’s "imposed cloud of slander and liable accusations," she spoke from a planned script as she called for justice.

While everyone is presumed innocent until proven guilty, the health, safety, and well being guaranteed to our citizens through our constitution can be overriding factors, she said.

"I invite you to go from here and speak for justice," Myers told the crowd. "Jesus said that we are our brother’s keeper. It wasn’t a question, ‘Do you want to be?’ but a responsibility given." She encouraged attendees to take pictures of Cortez to neighbors, work places, and churches. "Be bold," she said. "Be the voice of those awaiting the fugitive’s incarceration and court proceedings."

Myers promised to continue to keep the situation in the public eye as long as necessary.