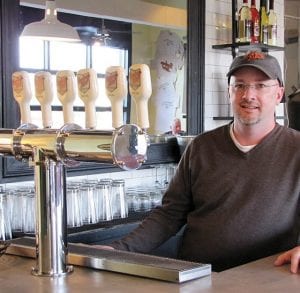 BUCKEYE LAKE – Buckeye Lake Brewery owner Rich Hennosy saw the writing on the wall and created a new story all his own.

Before opening the new Buckeye Lake Village business, Hennosy’s hours were cut back at the retail design company where he works. “The next thing is layoffs,” he said. Hennosy began looking for something he could do for a living where he could control his own destiny. He stumbled across a website called probrewer.com. He was fascinated. “I started following people’s problems and looking for solutions,” said Hennosy.

The more Hennosy read about brewpubs, the more he knew he wanted to open one of his own. His research brought him to Colorado Boy Pub & Brewery, a tiny brewery in Ridgeway, Colorado, whose owner, Tom Hennesy, specializes in helping entrepreneurs open their own small brewpubs. Hennosy signed up for a five-day course in Colorado. “(Hennesy) has 25 years experience and he’s doing this,” he said. “Within two hours of being out there, I knew this was it.” He said he and Colorado’s Hennesy still stay in contact.

Hennosy said in many ways, Ridgeway, Colorado was similar to Buckeye Lake, in that both towns are busy in the summer but slow in winter. Ridgeway isn’t close enough to the ski resorts to have strong winter business, but there are enough outdoor activities nearby to keep the brewery hopping in the summer. Hennosy said his family members have owned cottages around Buckeye Lake for many years and he’s very familiar with the lake area. “I thought, if it can work there (in Ridgeway), it can work here,” he said. “People come out here to have a good time.”

Hennosy said he had no qualms about whether a small town could support a brewpub. “There are bars in every small town,” he said. “If you can support a bar, you can support a brewery. I know that it works.” Just to make absolutely certain it would work, Hennosy hired Mike Byrne, a young, passionate brewer to handle production. Hennosy said this is Byrne’s first professional brewing position, but has full confidence in Byrne’s skills. “I recognized his passion for brewing,” said Hennosy. He said Byrne usually arrives at work early morning to fire up the brewing equipment.

“I’m very lucky,” said Byrne. He had responded to an on-line request for advice from Hennosy. Byrne said he and Hennosy related to each other well, and Byrne applied to be Buckeye Lake Brewery’s head brewer.

Byrne likes to arrive at work around 6:30 a.m., when there are no distractions and he can focus on his brewing before customers arrive in the late afternoon. He is a fan of pale ales and stouts.

Byrne hopes to have some more space eventually to brew more beers, but for now he’ll concentrate on perfecting the standard varieties. He said he’d been an avid brewer for five years before working at Buckeye Lake Brewery. “I’m still doing it at home, just not as often,” said Byrne. “I like seeing people enjoy the beer. It gives you a lot of satisfaction.”

On tap, Buckeye Lake Brewery offers a stout, an Irish red ale, a blonde, and recently an India Pale Ale, or IPA. “I like pale ales,” he said, and “fresh beer is always better than bottle beer.”

At the brewpub, Hennosy said he plans keep three or four standard varieties of beer on tap at all times, with occasional seasonals added and Byrne will rotate other varieties in and out. “We want to keep everyone happy,” said Hennosy. He also wants to keep customer from going away hungry. Buckeye Lake Brewery serves several varieties of panini sandwiches, blue potato chips, and anyone can order from Pizza Cottage’s menu and have the order delivered to the brewery. “They’ll deliver it right to your table,” said Hennosy. “People like that.”

As far as food offerings are concerned, Hennosy said he plans to move slowly on expanding the menu, preferring to focus on the beer for now. “We have a lot of ideas for this place,” he said of the location, a former filling station near the Buckeye Lake Village Offices. A small patio was recently opened in front and Hennosy would like to have some dedicated boat slips at Boat Boys Sayer Brothers Marina for water bound customers. “We’re just a five-minute walk from the lake,” he said.

Hennosy said that like Colorado Boy Pub & Brewery, which is in a 1915 brick building, he wanted Buckeye Lake Brewery’s building to acknowledge its roots. He said he accentuated the old pull-down doorframes that graced the old service station, and he removed drop ceilings from the interior to open up the room and give it a warmer atmosphere. Large windows encourage everyone who passes by take a look at the brewing equipment at work.

Hennosy hopes to begin selling kegs soon. “We want to be source for beer in this area,” he said. Unfortunately, Hennosy said brewpubs are so popular these days that it takes time to find available kegs. For now, draught sales are strong and customers can fill “growlers,” a bottle that holds several pints, to take beer home. “I think the growlers will be popular this summer,” said Hennosy. “I think there’s value to being the hometown brewery for Buckeye Lake.”