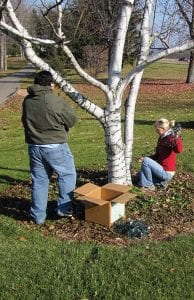 JACKSONTOWN – A flurry of activity may not be expected at an arboretum during the winter, but that’s exactly what’s happening for the staff and volunteers at Dawes this month as they prepare for the annual Luminary Tour Dec. 7, and race the clock to complete massive repairs to trees following the intense and destructive mid-summer “Derecho” storm by February.

“We really need the extra help,” said Volunteer Coordinator Jennilyn Haer. She said the arboretum hosts roughly 300 volunteers during the year with about 200 being very active. Some work more than 100 hours per year. “It’s a large volunteer base.” Haer said not only do the volunteers help with the well-known luminary tour during winter, but they also help prepare the gardens and other natural features for spring, maintain the trails, prepare mailings, and decorate the arboretum for the holidays.

Haer said the arboretum is very fortunate in that it attracts volunteers with plenty of gardening and horticulture experience, and the staff is very willing to train volunteers for specific tasks. Currently, volunteers have their hands full preparing for the luminary tour, which is an evening of illumination filled with nearly 2,000 candle luminaries lining the South End Auto Tour. 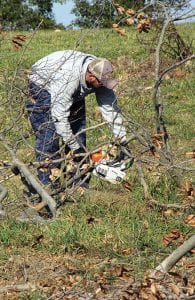 Elsewhere at the arboretum, wood chippers are running in high gear, working to repair seemingly endless storm damage. Horticulture Director Mike Ecker said staff and contractors are working as hard as they can to repair as much storm damage as possible by February, which is a deadline for receiving FEMA disaster assistance to help pay for dozens of uprooted and mangled trees. “It’s going really well,” he said. “We’re still seeing stuff up in the trees now that the leaves are off. It’s bad.” Ecker said the staff is doing what it can with the available equipment, but the arboretum also hired private contractors to take down trunks and other debris that may require special equipment or is near power lines. 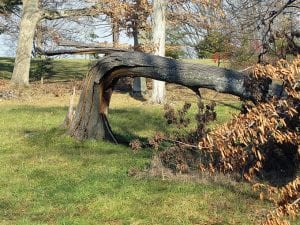 Despite the damage, Ecker expects the arboretum’s trees to be ready for spring and the storm damage is not affecting its tourism this winter. “The holiday greenery workshops are already filled,” he said. “They’re really popular.” 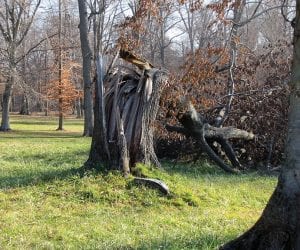 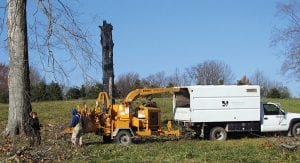 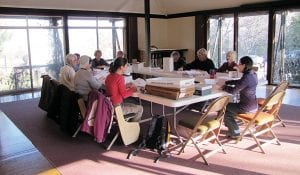