Brake at the Lake! 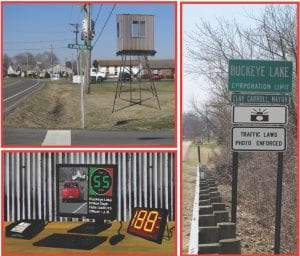 Top left, the portable Zack Shack will be moved up and down Ohio 79. Below the Action ® screen displays the video capture that includes the vehicle’s license number and speed. The officer just needs to click the mouse within five seconds to issue a citation. Right, Buckeye Lake has installed the warning notices required by SB 342.

Cities from Akron to West Carrollton were shutting down their cameras to comply with SB 342, which became effective March 19. The new law requires that a law enforcement officer be present at the camera site whenever it is in operation. Units are being turned off because it is too costly to have an officer present at every camera.

Approximately 250 traffic law photomonitoring units were in use in 15 Ohio municipalities at the end of the year, according to the Insurance Institute for Highway Safety.

Complying with the new law will actually be more efficient than its current traffic monitoring efforts, Buckeye Lake Mayor Clay Carroll told The Beacon. “When Jim (Bartoe) is out, he probably averages a couple tickets an hour,” Carroll said. “With this new technology he can issue tickets as fast as he can click a (computer) mouse.”

Carroll was reluctant to discuss the program in detail, but loosened up as he recounted its revenue-raising possibilities. He credited Finance Committee Chair Barry Hairon for “getting the ball rolling.”

“Barry knew that most cities were going to turn off their cameras so he called Redflex (Traffic Systems) to see if they might have a system available for us,” Carroll said. Redflex is a leader in photo enforcement and the largest operator in Ohio.

“Talk about good timing,” the mayor said. “Once we explained our situation, Redflex put a whale of a deal together for us. They are paying for everything. This isn’t costing us a dime.”

Here’s how it will work, according to Carroll and Hairon. Fedflex is supplying their state-ofthe art Stealth Master 3000 (r) photo-detection unit with Hawk-Eye technology. “The Stealth Master 3000 doesn’t flash when its electronic sensors detect a violation,” Carroll explained. “That way nobody, including the violator and nearby drivers, knows that anything happened. When Jim pulls somebody over now everybody sees the flashing lights and immediately slows down.”

Hairon gave an example. “Let’s say a dozen motorcycles speed through the village on a sunny Sunday afternoon,” he said. “If Jim’s out, he might stop one, but the rest of them will get away. With the Stealth Master, he can get everyone and nobody is the wiser until they get that certified letter in the mail a few days later.”

Here’s how the system will work. Redflex has purchased a lightweight and portable Zack Shack deer stand. It can be moved and set up in less than an hour. It’s outfitted with a portable heating/ cooling unit, a dorm room refrigerator, the Hawk- Eye technology package with a high-resolution video monitor and a recliner. “Jim wanted a Barcalounger, so that’s what Redflex bought us,” Carroll said. “There’s also room for a chemical toilet so Jim doesn’t have to miss a ticket when Nature calls.”

“The key to meeting the SB 342 requirements is the ‘contemporary observation’ mandate,” Village Solicitor Butch Benton wrote The Beacon in an email. “In other words, what are the specific requirements to satisfy the ‘be present’ standard?” Opinion No. 15- 017 from the Ohio Attorney General’s Office states, “The law enforcement officer must acknowledge the violation within 10 seconds of its real-time occurrence.”

Redflex Stealth product manager Maury Dinero said the 3000 requires the officer to acknowledge the violation (by clicking the computer mouse) within five seconds. “That makes sure the officer is paying attention and gives a break to border-line violators,” he explained. An alarm option is available and it’s part of the Buckeye Lake package. “Even if Jim or another officer dozes off, the alarm still gives them the opportunity to issue the citation,” Hairon said. The system can be set to detect violations at just one mph over the posted limit. “We’ll adjust that on the basis of our revenue needs,” Hairon said.

The Hawk-Eye package includes DirecTV’s Premier package with high-speed internet, and features RedFlex’s Over-Ride technology. Whether the officer is taking advantage of an on-line training video or just monitoring TV programs, the Action (r) screen with the image of the vehicle and its speed immediately takes over the screen, Dinero explained. The five-second clock begins when the Action (r) screen appears.

The Stealth Master 3000 unit is completely wireless and up to two detection points can be set in both directions for up to 1,000 feet from the video unit. It does require a straight-line of sight.

“It’s a win-win for Jim and us,” Carroll gushed. “There is no wear and tear on a cruiser; Sharon can just drop Jim off. There are no officer-safety concerns. Nobody will even know he’s up there.”

Redflex will issue the citations via mail to the registered owner’s address. Violators will have up to 10 days to pay the minimum $151 fine for excessive speed. That’s up from the current $126 fine. “We’re just adding Redflex’s $25 fee, which is a bargain, to our fine schedule,” Hairon said. There will be still be options for payment plans, but each payment will require a $7.50 convenience fee.

If the fine isn’t paid or payment arrangements made within 10 days, Redflex will issue a summons to court via a certified letter. At this point, the minimum fine increases to $176 with Redflex receiving the extra $25. Redflex is providing its Revenue Maximiser software to Court Clerk Valerie Hans. If the violator fails to appear, Redflex will issue a warrant state-wide for failure to appear, which includes a $100 pickup payment for the department that executes the warrant.

“The beauty of this system is that the violations are criminal charges since an officer witnessed them, not just civil citations from the untended cameras,” Hairon explained. “It’s a lot easier for me to collect fines, if the offenders are subject to arrest and jail if they don’t pay,” Hans added.

Local business owners don’t share Carroll’s or Hairon’s enthusiasm. “I can’t believe it,” Pizza Cottage manager Kevin Gorham said. “ First, it’s all the issues with the dam and now this. Nobody is going to be coming to Buckeye Lake. It’s bad enough with Jim just writing a handful of tickets a day. Now he can literally issue hundreds of tickets daily until people just stop driving through Buckeye Lake.”

Carroll’s reply was blunt. “Look I spent my first year (as mayor) trying to keep the village from going under. I cut expenses and Jim’s tickets kept us from running out of money. Everybody says government should be run like a business. That’s what I’m doing; our expenses are increasing so I’m increasing our revenue. That’s nothing to be ashamed of.”

Carroll said the mayor is in charge of the police department so he made the decision to install the camera. “I worked with Barry, but I certainly wasn’t going to spend weeks answering questions from Peggy Wells. Yeah, maybe there is a little bit of Boss Hogg in me. I guess I’d better trade in this tan Stetson for a white one. I might even start calling Jimmy (Police Chief James Hanzey) ‘Roscoe.’”

Carroll said April 1 turned out to be a great first day, but declined to give any details. “Let’s just surprise all those speeders when they open their mail next week.”