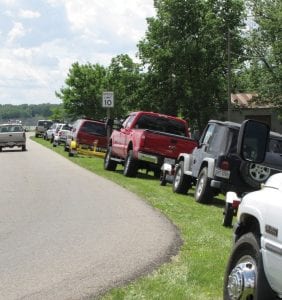 BUCKEYE LAKE – In sharp contrast to the past two years, it finally looked like a summer weekend last weekend.

Memorial Day is considered the unofficial start of summer and the Buckeye Lake boating season. By noon on Monday, there was no more room for trailers at the North Shore. Tow vehicles and trailers were parked on the grass and wherever they could squeeze in.

With the loss of one of two trailer lots at the North Shore and the loss of about 80 percent of the parking space at Lieb’s Island, it didn’t take long before boaters were being turned away.

The number of visitors in Cranberry Bay were still down despite the good weather and it certainly didn’t seem like a summer holiday weekend along the dam. Most dam front residents lost their front yards to the construction project and likely found looking at a chain link fence and what appears to be an abandoned construction site too depressing.

Lake bars and restaurants had their best weekend since 2014. Channel 10 had a particularly upbeat story on the return of Buckeye Lake. The reporter said water levels are back to normal. They are not and water levels over the weekend were at the interim summer pool of 890.5, one foot below what ODNR considers the normal summer pool of 891.5. ODNR’s last posted water level was 890.54 at 12:30 p.m. on Thursday, May 25.

Last year, ODNR and state officials were bragging about being a year ahead of schedule. Well, that year has officially been lost. There has been no significant construction activity for a year. Ruhlin Group, one of the two contractors building the stability berm in Phase 1, returned last week.

In response to our questions, project spokesman Ian Nickey said Ruhlin is “removing the spoils stockpiles from Phase I; preparing the site for the supporting buttress test-section; and will be pushing out the muck that was displaced by the Embankment Stability Berm.”

So far it appears that perhaps 25 percent of bank run stockpile at Lieb’s Island has been hauled away by dump trucks. On Wednesday, it looked like part of the fill under the Lieb’s Island boat ramp area had given way under the weight of the stockpiled berm material and the heavy equipment operating on top of it. It appears that the mucky fill is being replaced with aggregate and sand.

The most important subcontractor award is for the soilmix buttress subcontractor. According to Nickey, that “award is underway and the successful company will be announced once subcontract agreement is signed.”

If work on the test section doesn’t begin until June 30 (which would qualify as late June), Phase II will be starting 90 days behind schedule. Losing three months on the front-end before experiencing the inevitable break-down and weather delays could push final completion into late fall or early winter next year.