Blasts from the past this weekend at National Trail 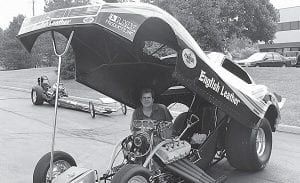 REYNOLDSBURG- It’s got a hemi. Television viewers may remember the 2003 Dodge Ram pick-up truck commercial where the driver of a Ram runs side-by-side with a bright green top fuel dragster. The Ram driver acknowledges that his truck, like the dragster, has got a hemi–a popular high performance engine. The green dragster is the classic 1969 “Jade Grenade,” which was the quickest conventional dragster (engine in front of the driver) in the nation with an elapsed time of 233 miles per hour, Oct. 10, 1971.

Owned by Columbus resident Don Trasin, the Jade Grenade is one of two classic racing cars he owns that will be displayed at the Holley NHRA National Hot Rod Reunion, June 15-17, at the National Trail Raceway in Hebron.

Trasin’s other restored racer won one the most emotional races in history. Trasin found its body in Seattle and its chassis in Wisonsin, and with lots of elbow grease he, restorer Pat Foster, and painters Corey Conyers and John Glaspey, put the English Leather “Silver Anniversary” Corvette funny car back together in which Tom “Mongoose” McEwen beat Don “The Snake” Prudhomme in the 1978 US Nationals. Just two weeks before the race, McEwen lost his 14 year old son, Jamie, to leukemia. Jamie’s dying wish was for his father to beat Prudhomme and win the nationals. McEwen beat Prudhomme at 235 miles per hour. McEwen’s Corvette restoration debuted at the 2003 US Nationals, exactly 25 years after it defeated Prudhomme.

“I got way, way lucky finding that one,” said Trasin. “It’s the ultimate memory car. It has a history like no other.” Trasin, president of Reynoldsburg’s Armor Asphalt & Sealing, has loved drag racing since he was 12 years old and began racing as soon as he turned 16. It was his dream to restore a famous racing car. That dream came true when he found the aged Jade Grenade in New York.

Unfortunately, neither racing car, returned to its original specifications, meets current safety standards, so neither will ever make another full throttle sprint down a quater mile. But, that won’t stop him from firing up their motors and showing them off at the National Hot Rod Reunion.