(Editor’s Note: This year as BLASST returns after a three-year hiatus during the dam replacement project, we thought readers, old and new, might enjoy Victoria Wolfe’s front page story in 2000 on BLASST’s roots.)

ORCHARD ISLAND – Who are Don and Dave Beck?

Well, for starters, Don and his twin brother, Dave, are the Grand Marshals of this year’s (2000) Fourth of July Parade. Buckeye Lake Area Civic Association trustees voted them Grand Marshals after I shared this story with them.

I can’t remember when I didn’t know Don and Dave. It seems like they were my brothers from the get-go. When you live on an island with very few people, it’s like a one-room schoolhouses, where kids of all ages hang out together. The older kids always watched out for the younger ones.

All the girls had crushes on the twins. All the guys thought they could do anything, mostly because they could. Needless to say, all the “grown-ups” also thought pretty highly of them.

Recently, I sat down to talk to Don, Dave and their sister, Sue, at their cottage on Orchard Island to reminisce. As they recall, early years of fireworks were sponsored by the people who lived on Circle Island and owned Bowman’s Dairy in Hebron. Buckeye Lake Amusement Park owners and Gardner’s grocery store also helped.

Then in the 1960s, John Wolfe and his brother, Ed, who were in their 40s, decided to have their own fireworks for family and friends. Ed hauled a wagon full of hay down to the front yard of his property on South Bank. They buried a metal tube in the hay, and the two of them took turns lighting the shells in the tube.

Everything went fine the first year, but the second year one of the shells blew up inside the tube and started the hay wagon on fire. Who didn’t know that was going to happen? Then it occurred to my dad and uncle that, although they loved the sight of them, fireworks were dangerous adult toys, and they would rather watch than participate.

Meanwhile the same year, Don and a friend of his, Calvin Gebhart, went over to Trotwood, Ohio, to the United Fireworks Co. They spent all the money they had for fireworks. They brought the fireworks home and set them off at Orchard Island. They had so much fun that the next year, Don started collecting money from businesses to help pay for the fireworks. He collected money from Millersport Bank, Millersport Marina, the residents of Orchard Island and some from Don’s small business.

John W. Wolfe was not particularly fond of most kids, but he had a genuine fondness for Don and Dave. So, when Don asked Dad if he wanted to chip in for fireworks that year, due to his fondness for Don and the fiasco that occurred the year before with the hay wagon, he was more than happy to give a generous donation. It was that year, as far as my father and I are concerned, that the Buckeye Lake fireworks display began.

One summer when the boys were doing a show, a big 15-inch shell went dead in the tube. They were both keenly aware that sometimes when you think a shell is a dud, it will blow up when you least expect it. They just poured a bucket of water down the tube. Then Dave reached in and pulled out the dud and threw it in one of the other buckets of water that were always kept close by,  but now the tube they needed was filled with water.

Certainly you probably know how they handled that problem. They put in a new shell and blew it out, of course. That plan didn’t pan out exactly as they anticipated. The water kept the shell from having enough pressure to soar up into the sky. It blew up low, went sideways a couple of times and zigzagged toward a boat docked nearby.

The shell went into the lake right next to the boat after scattering hot ashes and sparks all over it. The good news is no harm was done to the old varnished Chris-Craft that a little soap and water wouldn’t fix. The bad news was it was MY boat!

When Don collected money every year, John Wolfe would tell him, “I want more and I want bigger. Can you give me more booms? I love the booms!” He would hand Don more money until one year around 1970, John said, “Hey, since I am donating most of the money, can we move the fireworks from Orchard to Journal Island?”

Don and Dave were happy to oblige and so were their parents. They had no desire to see the family house blown to bits by fireworks. So far they had been lucky. If the truth were know, they were very lucky because the boys always stored the entire $2,500 worth of fireworks in the downstairs bedroom until the show. They shake their heads and laugh about that now.

From then on, every Fourth of July morning Don and Dave would pile all the shells and tubes into their dad’s boat, buzz over Journal Island, dig the holes for the tubes and lay the shells out in the order they were to be lit. When they were done, they would lay the canvas cover from their father’s Chris-Craft over all the shells to keep them and dry and away from any danger.

In 1975, at the end of the night, they cleaned up the mess, rolled up the tarp, threw it in the back of their dad’s boat and went home to bed. At around 3 a.m., a neighbor yelling, “Don Beck, Don Beck,” awakened the entire Beck family. It wasn’t until the neighbor said, “Your boathouse is on fire,” that all 10 feet hit the floor at the same time. They bumped into each other trying to get down the stairs at the speed of lightning. The canvas tarp had been harboring a smoldering ash until it finally burst into flames. As it turned out, only the tarp was on fire, and they promptly threw it in the lake. Neither their father’s boat nor boathouse was damaged.

In 1974, Don had to start obtaining permits and getting insurance for the fireworks. Until then, it was sort of a free-for-all, but laws changed to make it more difficult to buy the big shells. The twins always used every precaution to ensure a safe holiday for everyone involved.

Some of you might remember the flag that was lit at the end of the dock on Journal Island after the finale. What you may not know is that flag was a present to Dad from the twins. Every year they would hand him a flare when they were done and he would walk to the end of the dock and light the flag with a child’s smile on his face.

The boys, now men, consider themselves very lucky that nothing tragic ever happened through the years. 1976 was the last year they lit the fireworks for Dad. They were starting families and their businesses, so playing with fire was not an alternative for them anymore.

Today (2000), Don owns and works at Delaware Marine. Dave works for the City of Columbus as a construction inspector. They carry fond memories of their golden pond. Both men have suffered hearing losses from setting off fireworks for so many years, but somehow it just doesn’t seem to matter.

They were not enthusiastic about the idea of being in this year’s parade. They are just two unassuming guys who live their quiet lives. However, if Dad were alive today, I think he would be proud to see them float down this lake as Grand Marshals. They have absolutely earned their place!

Editor’s Note: A bequest from John W. Wolfe via the Robert F. Wolfe and Edgar T. Wolfe Foundation at The Columbus Foundation jump-starts BLASST’s annual community campaign to keep this Buckeye Lake tradition alive. His bequest covers about 20 percent of the cost for our annual show, so your help is needed to keep BLASST alive. Please send your tax-deductible contributions, with checks made payable to BLASST, to: BLASST, PO Box 1524, Buckeye Lake OH 43008. Thank you for your support! 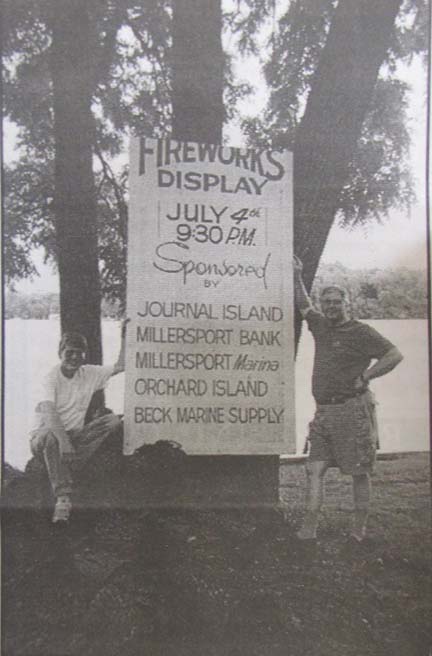 As the boat crowds for the fireworks grew, Don made a sign so visitors would know who was footing the bill for their entertainment. That sign was used as a shed door on the Beck property for years and has become a little tattered. Dave is on the left and Don is on the right in the photo. Photo by Victoria Wolfe.