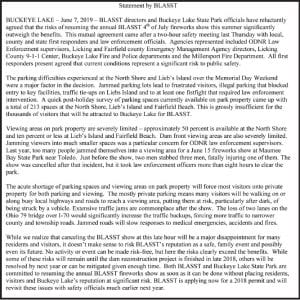 BLASST organizers announced about three weeks ago that its permit application had been approved by ODNR and that the show was set for 10 p.m. on Monday, July 3.

Both BLASST’s and ODNR’s decisions were made before Memorial Day Weekend. Parking at both the North Shore and Lieb’s Island was quickly overwhelmed by boaters anxious to get back on Buckeye Lake after two years. The severely limited parking lead to many boaters being turned away, illegal parking that in some cases blocked access to key facilities, traffic tie-ups at both ramps and on Lieb’s Island and hot tempers.

With most park property off limits due to the dam reconstruction project or its use as dredged material relocation areas, the local, county and state first responders and law enforcement officials at the last Thursday’s safety meeting unanimously agreed that resuming BLASST this year would represent an unreasonable risk to public safety.

The nearby statements from BLASST and the EMA directors in Fairfield and Licking counties detail the public safety concerns that prompted the cancellation.