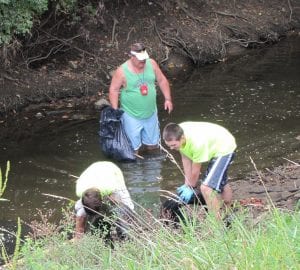 LAKE AREA LICKING COUNTY– Hebron Development Coordinator Linda Nicodemus couldn’t have been happier with the results of Saturday’s Licking County River Roundup. “This is the best one we’ve had yet,” she said. This year, the 20th event, whereby volunteers clean trash and debris from the Licking River and its tributaries, covered many Licking County entities, including Hebron, Buckeye Lake Village and Union Township. This was the third year of participation for Hebron.

“Our river roundup was very successful,” said Nicodemus; this is the third year Hebron has par ticipated. “ We had f ive teams with a total of thirty- one volunteers,” she said, adding that the areas Hebron cleaned were: just east of the Municipal Building along Sunset Dr. /W. North Street; South of that area behi nd the Village Square/Lagos Apartments; Greenbriar Estates; the E. Main St. Water Tower a nd past the East Main Lift Station toward the outfall into the South Fork Licking River. “The volunteers went above and beyond what we expected clearing debris, trash and clearing brush,” Nicodemus said. “Some of the volunteers came from the river roundup campaign, some attended the (Hebron Village Council’s) storm water tour and some learned of the roundup from the post cards delivered door to door along the storm ditch.” 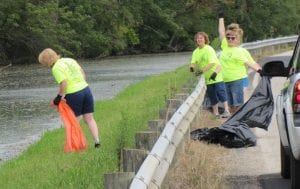 She said Hebron’s State Industrial supplied the trash bags and gloves and Harry & David supplied truffles and brownies for the countywide event. “Bobby Hayman gave free ice cream cones to all of Hebron’s participants,” Nicodemus said. She said Hebron held its second annual Clean-up Day on the same day as the river roundup with 15 residents participating. Nicodemus said Hebron’s total collected for both events: one 20-yard dumpster plus a half of a 30-yard dumpster, 20 tires and 5 or 6 loads of brush. 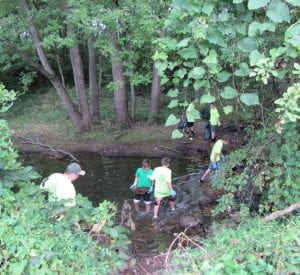 “We collected twenty bags of trash and recyclables,” Greene said. “We didn’t find anything strange—a few items out of place such as baseballs, soft balls, kids shovel, storage tote and a large piece of barn tin.”

“We had a real nice turnout,” said Buckeye Lake Mayor Clay Carroll, who estimated 23 volunteers helped clean a Licking River tributary from the Buckeye Lake spillway to the Duke service station. “They did a real nice job,” he said, adding that tires, an air conditioning unit, and a television were removed. “All kinds of good things,” Carroll said. 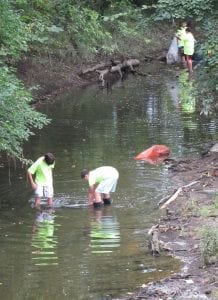 Buckeye Lake Village river roundup coordinator Vaughn Klingler said volunteers in Buckeye Lake consisted of Boy Scout Troop 2 from Newark (23 volunteers) plus a few others including five associated with the village (Carroll and his wife, council clerk Valerie Hans, Klingler and his son Kyle). “We used a 14-passenger van from Neal Avenue UMC in Newark to transport people to their drop off points and then to pick them up later,” Klingler said. “We were able to take out more than 20 tires from the river and approximately five cubic yards of trash including an air conditioner, TV, luggage carrier and lots of plastic piping.”

He said metal items were recycled. The Buckeye Lake contingent worked from 9 to 11:45 a.m. Creno’s Pizza provided the Boy Scouts with five pizzas as a reward for helping. “This project could not have been done with out the help and encouragement of the leaders of the Licking County River Roundup and the leaders of the Boy Scout Troop 2,” Klingler said. 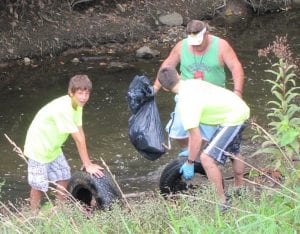 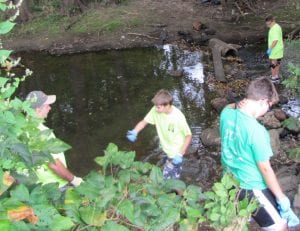 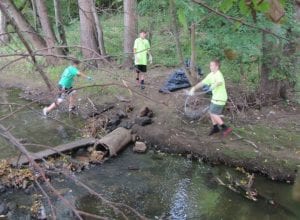 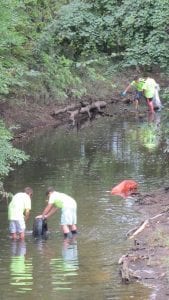