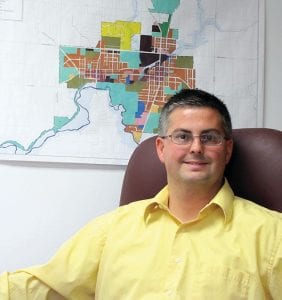 BALTIMORE – After just three days into his new job as Baltimore’s village administrator, Scott Brown sees similarities between Baltimore’s needs and those of his former employer, McConnelsville, Ohio.

“With any village, there are always utility projects,” he said. Brown said Baltimore is finishing a waterline project on its north end that will affect roughly 60 customers. “We’ll be tapping them into the new line and abandoning the old line,” he said. Brown said the village has a permit to install a sewer line extension on Ohio 256 east.

In the very long term, Brown said he’d like to see the village’s 77-year-old water plant replaced. He said the existing plant has been upgraded and expanded about as much as it can. “It’s time to start looking for new,” said Brown. He expects it would take a few years to co-ordinate all the lenders to finance such a project. “You can’t just start building it today,” he said.

Brown was McConnelsville’s village administrator for two years before Baltimore selected him to replace Marsha Hall, who resigned Dec. 30 to become Groveport’s city manager. He was already very familiar with Baltimore and the Zanesville native said he jumped at the chance to apply for the job.

“I helped towns like Baltimore with water and sewer,” he said. Baltimore, in particular, caught his attention as a nice rural community. “I knew it would be a great fit for me,” said Brown. He was happy that the village council agreed.

“He’s thought of highly (in McConnelsville),” said Baltimore Village Council member Jim Hochradel. He said Brown was chosen from 35 to 40 applicants for the administrator position.

Hochradel said council’s Rules Committee picked six applicants to be interviewed. Of those six, he said one took another job during the interview process and another realized he wasn’t what the village was looking for and withdrew his resume. Hochradel said that of the four remaining applicants, the council was extremely interested in two – Brown and another applicant that Hochradel said had outstanding public relations skills and good technical knowledge. He said Brown also has excellent public relations skills but is extremely knowledgeable in public utilities and grant writing, so he got the job. “We were really impressed with his knowledge from Rural Water,” said Hochradel.

When not on the job, Brown says he spends most of his free time with his family in Zanesville, where his wife grew up and his children are actively involved in sports. “Both my boys play soccer,” he said. “We spend a lot of time with soccer.”