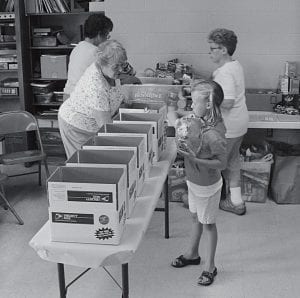 The inspiration for the project came last summer when Gates’ nephew went to Iraq. He sent an e-mail home asking for treats. Sometimes, mess halls are closed when troops return from a mission and they findthe available MREs (Meals Ready to Eat) unappetizing. Basically, they are hungry, Gates explained.

Shipments began in early February with eight flat-rate Global Express boxes going out each week. Postage costs $8.85 per box, no matter what it weighs. Ety and Gates make the most of the deal, cramming every inch with easy-to-fixfood and snacks. Each box is lined with Ramen noodles to cushion everything else. It doesn’t matter if the noodles are crushed a bit, since it makes them easier to eat, Ety explained.

The focus is on stable foods that can be microwaved and easy-open cans. Beef jerky is popular as are powdered drink mix packets that make the treated water taste better. Hard candies are used to fillevery nook and cranny. Ety and Gates try to honor special requests. Chocolate is on the don’t ship list since it melts in the heat. But one soldier asked for miniature bars which will reset after melting. Each box is topped off with a couple of notes from church members or local students.

The group started sending out eight boxes a week, but two soldiers have returned home. Ety and Gates are ready to add any lake area soldiers in Afghanistan or Iraq to their weekly shipments. Just call Ety at 740-862-4050 with their name and APO address. Shipping takes about three weeks.

The project is funded by donations and the proceeds from the church’s annual October craft show. The fifth annual show will be October 27.

Notes of appreciation for our soldiers are also needed. So far, a total of 107 boxes have been shipped and Ety and Gates plan to ship many more.

Their efforts have not gone unnoticed. They have been thanked via personal letters, emails and Certificatesof Appreciation from unit commanders.