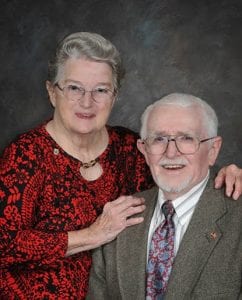 Will and Ruth (Crutcher) Beckwith were recently inducted into the Central Ohio Area Agency on Aging Senior Citizens Hall of Fame, for their work with the Baltimore Food Pantry. Courtesy photo.

BALTIMORE – Three residents were honored with proclamations at the May 27 council meeting.

Walter Vannatta was honored for his induction into the Ohio Military Hall of Fame for valor. He told council members that 48 years ago yesterday (May 26), his 15-man squad of pathfinders ambushed a large group of Viet Cong during the Vietnam War.

Will and Ruth (Crutcher) Beckwith were recognized for their induction into the Central Ohio Area Agency on Aging Senior Citizens Hall of Fame for their leadership at the Baltimore Food Pantry. The Agency notes that the pantry has become a wellestablished, all volunteer operation with all food items donated.

As a rural mail carrier, Ruth saw the need for food, particularly at Christmas. The group started providing holiday dinner baskets then moved to providing a twomonth supply of groceries. The next step was the Saturday bread giveaway which now includes produce and other perishable items. An average of 50 families are helped every Saturday.

“We have a wonderful group of volunteers,” Ruth said.

In other council business, Village Administrator Scott Brown said the pool would open May 31. Bids to replace 900 feet of fourinch waterline on North High Street with eight-inch PVC pipe and to replace two fire hydrants were opened May 27. Just two bids were received. Kendrick Excavating of Dresden will do the job for $99,921. The other bid came in at $140,000.

Brown said it cost about $1,500 to till and reseed the portions of Johnson Park damaged by the circus. His report prompted council members to table a resolution granting a special use agreement to the Baltimore Festival Committee. Several council members want to add a requirement to the agreement that the Committee be responsible to pay the cost to fix any damage occurring during the festival. The festival has dropped Wednesday nights and will now run three days – Thursday through Saturday.

Brown also reported that he recently spoke with a Newark Paper Mill engineer. Brown was told that Ohio EPA will be issuing an air permit for a flare at the mill’s wastewater treatment facility. Once the permit is issued, the mill plans to cover their wastewater lagoons and burn off the captured gases with the flare. The project is expected to significantly reduce the odor produced by the treatment facility.

Council members also unanimously approved an ordinance authorizing an agreement with Schaffer’s Drive-in to operate the pool concession stand. The agreement is for three years with the annual $450 rent due at the beginning of the season.

Council members also unanimously agreed to bypass the committee and to suspend the three-reading rule to approve a resolution detailing the services the village will provide to a 3.69 acre parcel owned by Mary A. Call that she has requested be annexed into the village. The property is just north of the railroad tracks on Canal Road. Village Solicitor Jeff Feyko said the village is on a very tight time schedule.

The Planning Commission will meet at 7:30 p.m. on Thursday, June 12, to continue to work on revisions to the village’s sign ordinance.