Back to school safety tips 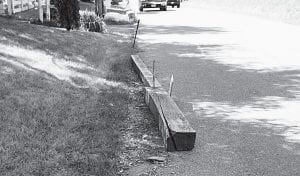 Licking Township Trustees unanimously agreed Monday night to remove railroad ties placed in the roadway on Somerset Road along Robert Snedden Sr.’s property. Snedden has contended for years that the township road has extended too far onto his property. He had previously placed railroad ties and rocks along the edge of the roadway, but the railroad ties recently appeared in the roadway. Last year, Licking County Commissioners asked County Engineer Tim Lollo to determine the true center line of the road as the first step to resolving Snedden’s claim. That determination hasn’t been done. Trustees acted after receiving a written complainant from a Dogwood Lakes resident who said he recently struck one of the railroad ties at night. After noting the start of school Wednesday, trustees decided to remove the road hazards. They were removed without incident Tuesday morning with sheriff’s deputies standing by. However, stumps had replaced the ties by Tuesday afternoon. Their removal was pending at press time. Courtesy photo.

MERIDEN, CT – With the start of the new school year, students will be rushing to be on time, parents will be getting them on their way, and drivers will be going about their business — all could heed some advice on safety.

“This is a critical time of the year,” noted Ray Palermo, director of public information for Teachers’ Insurance Plan. “Drivers need to re-acclimate themselves to having children on and near the road, particularly at rush hours. And, both children and their parents need to get back into their good traffic safety habits.” He offered several tips from their “Back to School” safety brochure.

Tips for Walking or

• Walk with a friend.

• Pay attention to all traffic signals and crossing guards. Never cross the street against a stop light.

• Cross only at crosswalks, and never run into the street from between parked cars.

• Look left, right, and over your shoulder for traffic before crossing a street, and continue to check each direction.

• Make sure drivers see you by making eye contact with them.

• If riding a bicycle, scooter or skateboard to school, always wear a helmet and ride in the same direction as traffic. Walk your bike if crossing a street.

• Do not play in the street while waiting for the bus.

• Line up facing the bus, not along side it.

• After getting off the bus, move out of traffic.

• Wait for the bus driver to signal you to cross the street. Walk away from the front of the bus so the driver can see you.

• Everyone should wear a seatbelt, and children should be in age and size appropriate car seats.

• Stay focused on driving and don’t be distracted by kids in the car or with other activities.

• Slow down in school zones. Driving just 5 MPH over the speed limit increases both the risk of hitting a child and the severity of any injuries.

• You never know if children crossing the street are paying attention, so remain stopped until the child has crossed not only your lane of traffic, but the adjacent lane as well.

• Never pass a vehicle that has stopped at a crosswalk, as they may be waiting for someone to cross.

• Do not pass a school bus when its red lights are flashing, even if it is on the other side of the street.

• Use extra care in areas where children may enter the road from between parked vehicles or other things that block drivers’ view of the road. And, watch out for bicycles.