Back to back MSL champs 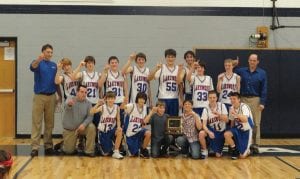 HEBRON – The Lakewood 8th grade boys basketball team entered this season with targets on their backs after winning the Mid State League championship as seventh graders last year. With a goal of a second MSL championship in mind, the team played hard, practiced harder and finished the regular season 14-2.

During the Christmas break, the Lancers competed in the West Muskingum Holiday Shootout. They took first place with wins over Sheridan and Maysville.

Lakewood was seeded first in the MSL tournament, defeating Heath 52-28 in the first round, with 11 of 12 players scoring. The second round match-up was against a tough Granville team but the Lancers prevailed 43-29. The championship game was a rematch of last year, pitting Lakewood against Newark Catholic.

Lancer fans filled the stands. Lakewood lead 12-11 after the first quarter and it was 20-20 at halftime. In the second half, Lakewood put on a defensive show holding Newark to 12 points. By capitalizing on key turnovers and shutting down Newark’s offense, the Lancers pulled ahead by 5 with two minutes left. Adding a bucket in the final minute, Lakewood won with a final score of 39-32.