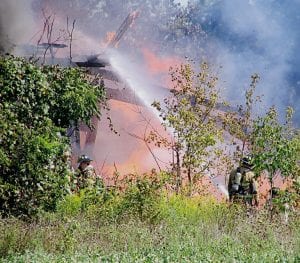 The burning barn, which may have been 100 years old, created a fireso big that nearly a dozen emergency vehicles from eight departments responded – including Buckeye Lake, Hebron, Millersport, Licking Township, Thurston, Heath, Thornville, and Granville.

A fleet of firedepartment tankers shuttled more than 50,000 gallons of water from a firehydrant in front of the Village of Hebron’s water treatment plant to the scene. There were no injuries.

“We actually didn’t use the water to put out the fire,” said Miller. “We didn’t want to go chasing a woods fire.” The barn, which had burned previously, ignited fast and was quickly engulfed in flames this time. He said the firefightersdoused the surrounding trees and the outside of the burning barn so the structure would collapse inward upon itself and not scatter burning wood into the surrounding foliage. The burning barn is near a house at 237 Seymour, but the barn doesn’t have a formal address.

Currently, said Miller, the State Fire Marshal is looking into the cause of the blaze. The barn had no electrical utilities and there were no flammable material like hay or straw stored in it. Miller said juveniles often loitered around the old barn and it’s easy to presume the firewas set intentionally, although it isn’t proven. The incident remains under investigation.