Army Corps: The check is in the email 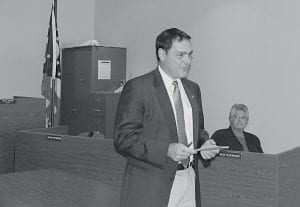 U. S. Congressman Zack Space (D-Dover) comments during the August 17 signing ceremony between the Village of Buckeye Lake and U. S. Army Corps of Engineers. Beacon photo by Scott Rawdon.

BUCKEYE LAKE- The Village of Buckeye Lake should soon see money that was promised to it years ago. Aug. 17, Congressman Zack Space, Capt. Ramon Mejia from the Army Corps of Engineers, Khisha Fallon, district representative for Senator George Voinovich’s office,and Village of Buckeye Lake officials gathered to sign documents pledging cooperation between all parties and releasing about $305,000 to the village. The money is designated to be used toward a public water system.

Several years ago, former Congressman Bob Ney promised the money to the village as a gift to help the village get a public water system started. But, when Ney resigned Nov. 3, 2006 following a guilty plea to charges of conspiracy and making false statements, the US Army Corps of Engineers Huntington District took over administration of the money. Since the Village of Buckeye Lake wasn’t going to use the money before the end of 2006, the Army Corps redirected it to other Army Corps projects, then found it didn’t have to ability to pay it back to Buckeye Lake immediately. Space’s and Voinovich’s officesworked together to help secure the money for the Army Corps. The Aug. 17 signing ceremony placed Buckeye Lake one step closer to receiving the money from the Army Corps.

US Army Corps Project Manager Lisa Morgan said the funds will be transferred to the village electronically and she expects “a significant portion” of the money to be transferred by next month.

Morgan said the village was allocated $350,000 toward the total project costs. The village can expect to receive an estimated $305,000 in reimbursements in accordance with the terms of the Project Cooperation Agreement between the village, the Corps, and Space’s and Voinovich’s offices. Morgan added that the Aug. 17 ceremony and signatures on a partnering agreement marked a significantmilestone for the village’s efforts to attain a public water system and each signatory pledged his or her commitment “to work together as partners engaged in the public interest as they take part in the Village of Buckeye Lake water system project.” Morgan added that the village can use the money toward any part of the water system project.

Space commended the village for its persistence. “This is a very worthwhile project,” he said. “We’re pleased to help.” Although the challenges in securing the $305,000 precede his taking office, Space said he’s happy he could help “disentangle” the money.

Fallon read a statement from Voinovich, quoting the senator, “As a member of the Senate Environment and Public Works Committee, I have worked closely to support legislation to improve water and water infrastructure for our communities and for our nation.” He continued, “I commend the Village of Buckeye Lake, the US Army Corps of Engineers, the Ohio Water Development Authority, and all the partners who have been, and who will be involved in this project for their commitment to water quality and infrastructure.”

Currently, the village is formally negotiating with the Village of Hebron to purchase bulk water and, informally, the Village of Millersport has expressed an interest in possibly supplying the village with water as well. If an agreement is reached with either Hebron or Millersport, the Village of Buckeye Lake would only be responsible for installing water pipes throughout the village to serve its residents. If no agreement is reached, Buckeye Lake officials are also considering creating a village-operated public water system which would include its own water treatment plant. A village-operated public water system is projected to cost about $9 million.