Analysis: Will we have a boating season? 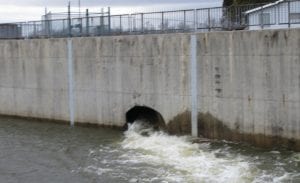 LIEB’S ISLAND – Precious water was flowing out both spillways on Wednesday.

Last Wednesday recent rainwater which had pushed up the lake level to just above 889.30 – about nine and a half inches above ODNR’s ‘new winter pool’ – was flowing out the open AMIL spillway in Buckeye Lake Village. Looking at the lake elevation graph below right, it appears ODNR decided to open the Seller’s Point underdrain early Friday morning. That decision started a steady descent in the lake level. By Wednesday morning (January 11), the level was just below 888.80 or about three and a half inches above the ‘new winter pool.’ The open AMIL gate stops releasing water at about 888.50. It too has an underdrain, but it hasn’t been open for some time.

The underdrains at both spillways have the ability to essentially drain the lake. Some water would be left in the deeper areas particularly off Cranberry bog. 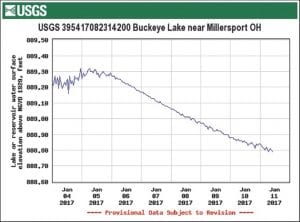 Project spokesperson Ian Nickey was at the AMIL spillway Tuesday afternoon. When asked why the underdrain was open at Seller’s Point, he said the lake was being operated in accordance with the management plan adopted after the completion of Phase 1 last May. That plan, reproduced as provided to The Beacon last June on Page 2, states that when the winter water level exceeds the winter pool (888.50) by six inches and rising that the “Seller’s Point Spillway 60″ Lake Drain open 100%.” A footnote states that the tailwater (discharge) level downstream be monitored.

That short three- inch trigger will make it difficult to maintain the interim summer pool if it is even reached. It is not uncommon for the lake to lose an inch or more per day during hot and dry periods. Hot and dry is the more common condition particularly in the peak summer months of July , August and early September. Last year, the lake lost about 10 inches between May 26 and the 4th of July when it was almost six inches below the ‘new winter pool.’

He was unfamiliar with ODNR’s Buckeye Lake Fisheries Management Plan completed July 1, 2015. That plan stated that the lake’s surface area “is now reduced from 2,873 acres to 2,363, ” a nearly 18 percent loss. More importantly, the plan said the volume of water “is reduced from 14,641 acre-feet to 6,462 acre-feet.” That’s a volume reduction of 56 percent.

Consequently, considerably more water will be needed this year to reach the interim summer pool than in pre-2015 springs. For example, some 500 acres don’t have any water and that likely does not include all the nearly dry canals. Nickey was asked why ODNR was relying on past practice – close the AMIL spillway on March 1 – when the circumstances are vastly different this year.

He was also asked why the AMIL spillway couldn’t be closed incrementally as Merv Bartholow suggested last year. Each stop bar is about 4 inches high so it takes about six stop bars stacked on top of each other to raise the water level two feet. Adding one or two rows now would start raising the lake level incrementally, making it much more likely that enough rainwater and snow melt is captured to reach the new pool by May 1.

Nickey didn’t have any answers and suggested that these questions be directed to him and ODNR spokesperson Matt Eiselstein in an email. We will do so and publish their responses next week. Maybe we will finally get some answers.