Analysis: What does the report really say? 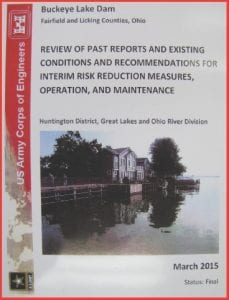 BUCKEYE LAKE – In a nutshell, there’s not much that’s new.

Here’s how it breaks down:

• Three and a half page introduction;

• Five and a half page review of previous engineering consultant reports;

• Five pages on risk reduction; and

• A three-quarter page of conclusions.

What’s most interesting is what isn’t in the report.

ODNR publicly acknowledged its plans on March 4 after local residents questioned why the regulatory spillway in Buckeye Lake Village was not closed as it has been for years on March 1. That statement said ODNR was waiting to receive USACE’s report on the Buckeye Lake dam. Release of the report was to take place “within the next week.” A decision on ODNR’s next steps was expected “to take place within the next three weeks.” 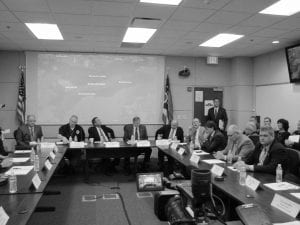 Ohio Governor John Kasich, center, listens to a question during the March 19 media briefing at the Ohio Emergency Management Agency in Columbus. He is flanked on the left by Sean Grady, Licking County Emergency Management Director and ODNR Director James Zehringer on the right. Kasich announced that the Buckeye Lake dam would be replaced by a new dam at a cost of $125 to $150 million. He added that there would be “no debate or negotiations about the height of that lake.” That means the water level would be held at or below the winter pool which is three feet below the summer or full pool level. Winter pool averages about two feet deep. Beacon photo by Charles Prince.

ODNR, after canceling a face-to-face meeting with local leaders, scheduled an invitation-only tele-conference for 3 p.m. on Wednesday, March 11. Residents who had been consulting with ODNR on dam issues for years were to receive a copy of the report an hour before the meeting. A copy was also to be available at the same time on ODNR’s Division of Engineering’s website. Both deadlines were missed, though local leaders did receive a digital copy a few minutes before the tele-conference.

While distribution to Buckeye Lake interested parties and the general public was delayed, at least one media outlet got an advance copy. Eric Lyttle of The Dispatch posted an on-line story at 2:13 p.m. The most notable paragraph read, ‘The resulting flooding would most probably occur without sufficient warning or evacuation time,’ and that those homes and businesses – and – people within the flood zone ‘face the potential of being hit by up to an 8-foot wave of water, mud and debris.’ That quoted reference to an “8-foot wave” or wall “of water, mud and debris” quickly defined subsequent television and print media reports. During his March 19 press conference, Governor John Kasich saw the “8-foot” and raised it to “10 feet.” The first part of the quote appears in this sentence beginning on Page 15 of the report: “The district has determined that embankment breaching, downcutting, and lake discharge and resulting f looding would most probably occur without sufficient warning or evacuation time.” The rest of that paragraph reads, “Estimates for breach, non-breach, and incremental consequences of this unstable embankment have not been fully developed. However, numerous residences built within the downstream embankment slope and immediately downstream of the embankment and appurtenant structures would likely be adversely impacted in the event of a breach.”

Guess what’s not in the report – ‘face the potential of being hit by up to an 8-foot wave of water, mud and debris.’ Lyttle is an experienced and talented reporter; we’re not questioning the accuracy of the quote, just its origin. The most fear-inducing and inflammatory statement in the dozens of subsequent media reports is NOT in the report. It most likely came from the ODNR official(s) who provided the advance copy to him.

That ‘up to 8-foot wave’ or in Kasich’s case ‘potentially as high as 10 foot” threat to life and property has been and is continuing to be used to justify actions already taken with NO local input that will destroy hundreds of jobs and businesses, thousands of property investments and the lake itself. It is also creating fear and in some cases panic among some year-round residents that don’t have the resources to relocate or quickly evacuate.

Here’s what the report did state on downstream effects. “ The District recommends that ODNR conti nue to reevaluate the consequences of embankment failures and South Fork Licking River flooding to better define present extents of inundation damages and loss of life.”

During the March 11 tele-conference, ODNR Director James Zehringer stated, “Seepage is our biggest concern.” The report considers ‘seepage’ a threat to the dam “at and above normal pool.” Table 2 on Page 3 summarizes elevation data:

Kasich stated on March 19 that there will be, “No debate or negotiations about the height of that lake.” That means the lake will be held at winter pool, which is 3.5 feet BELOW the level when increased seepage has been observed.

USACE read 18 piezometers and nine monitoring wells twice during the assessment. Most were installed as part of the Paul C. Rizzo Associates, Inc. study in 1997. Piezometers are basically tubes or standpipes installed into the base of the embankment or in the foundation. While they are primarily designed to measure liquid pressure by measuring the height of water in the tube, they can also be used to determine seepage by testing the water quality. In just one piezometer was the water quality considered comparable to lake water. That’s ONE out of 27!

The report doesn’t let this good news get in the way of its bleak assessment stating, “Although this seepage relationship was established for only one piezometer, it is likely that, considering the limited number of piezometers along the 4.1 miles of embankment, other seepage locations exist.” Beyond identification of the one piezometer, the report does NOT document or identify any other seepage locations. The report’s limited evaluation of seepage becomes evident in the interim risk reduction measures. Several specifically address seepage such as “perform thermal sensing of the embankment, house foundations and walls, and adjacent areas to define voids and seepage conditions” and “conduct geochemical characterization to better define lake water, embankment seepage, outslope area springs, and extents of commingling.”

T he repor t’s Operation and Maintenance recommendations include installing additional piezometers and to read all of them and the observation wells monthly.

This report has been characterized by Governor Kasich, ODNR, many politicians and the media as the definitive report on the Buckeye Lake dam. There is very little specific documentation. Much is made of the 1968 and 1990 near over-topping incidents while barely mentioning the 1995 installation of the Seller’s Point spillway which basically eliminates the threat of overtopping. The report is a decent survey of past reports and dam history that also makes recommendations for additional evaluation and the adoption of interim steps to reduce risk.

Unfortunately, it is being used to shut down any discussions about how to repair/replace the dam and to justify spending $125-150 million to replace the dam over a 5+ year period. It’s now ODNR’s way or the highway. The report claims, after acknowledging “limited data,” that “the available data are sufficient to support the District’s opinion that the likelihood of dam failure is high based on prior near-failures (pre-Seller’s Point spillway) and adverse conditions at and above normal pool, including but not limited to seepage, wall and dam misalignment and requirements on several occasions for emergency response actions (again prior to Seller’s Point spillway installation) to prevent breaching.” ‘High’ is a very scary word and never defined in the report. Some media reports have taken it to mean “imminent” which is NOT used in the report. Whatever probability ‘high’ is assigned, it’s going to be far less than the 100 percent probability that holding the lake at winter pool levels for five plus years will devastate the lake’s ecology including its fishery and the economy in the three-county lake area. Immediately implementing some common-sense repairs and regulations on building next to the dam will further reduce the probability of failure. The cure doesn’t have to kill the patient.