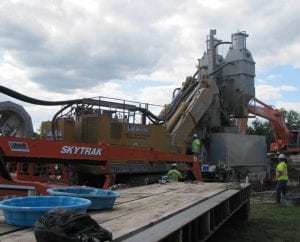 BUCKEYE LAKE – Some 30 feet into building the buttress wall from the north side of the Sellers’ Point Spillway to the causeway crossing in front of the spillway last Tuesday afternoon (August 15), the cutterhead got stuck in the soil mixing trench.

Efforts to free it were unsuccessful and it was uncoupled from the giant power unit. About half its length stuck out of the trench, looking like some mechanical monster trying to escape its earthen grave.

Workers spent about 40 daylight hours trying to free it before it was finally recovered last Friday. We’ve heard, unconfirmed, that the cement/additives mix wasn’t right, causing the soil mix to set too quickly, trapping the cutterhead in the trench.

After being reattached to the power unit, a neighbor said the trencher was back on the job Tuesday afternoon (August 22). By the time we arrived mid-afternoon Wednesday, the unit was shut down for repairs. A welder was working on the lake side of the drive head (see green shirt below the slurry hoppers in the bottom photo). A couple other workers seemed focused on the other side (see green shirts in the top photo). The treacher had moved about 70 feet down the berm since being stuck. 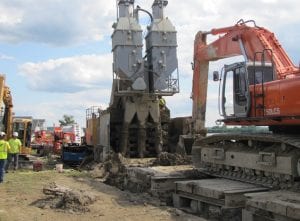 About 600 feet of buttress wall has been built since the trencher arrived two months ago. Though some of that time was lost to setup and early adjustments, building more than 21,000 feet of the buttress wall by late 2018 seems wildly ambitious.

While spokesperson Ian Nickey contains to state as recently as his August 18 Construction Update that the project “is scheduled to be completed in late 2018, ” the schedule and what actually happens are not the same. Silently, ODNR may agree as we’ve heard the daily work schedule will increase from 12 to 18 hours once it moves to the North Shore and starts down North Bank. That move is supposed to happen late this week or early next week.