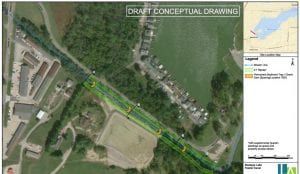 Both illustrations are by ODNR’s consultant Lawhon & Associates, Inc.

BUCKEYE LAKE – Lake residents are now into the fourth year of an ODNR-imposed dam replacement project.

The promised consultation from ODNR Director James Zehringer back in August 2014 never materialized. ODNR then named its own advisory council and the group meets infrequently with very little input. ODNR’s few public information sessions have been one-way exchanges with ODNR telling and residents listening.

Local influence on the project has been almost non-existent. Thanks to Millersport Fire Chief Bob Price, ODNR did agree to reduce the height of the chain link fence from six to five feet and provide access to emergency crews.

An ODNR agreement with Fairfield County and Walnut Township to repair the damage from their heavy truck traffic on Lieb’s Island and Millersport roads appears to be unraveling. ODNR is contesting the level of repairs needed to return these roads to their original condition. ODOT is now being brought in as a mediator. 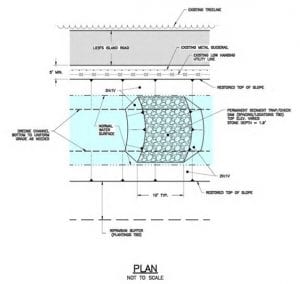 But thanks to Ohio EPA, we will have some input on how ODNR mitigates the water quality effects from the dam replacement project.

In order to get a Section 401 Water Quality Certification which is a pre-requisite to get a Section 404 permit from the Army Corps of Engineers allowing the discharge of fill into Buckeye Lake, ODNR had to submit a mitigation plan. The original plan was submitted in May and was subject to an Ohio EPA hearing on June 26 in Millersport.

ODNR proposed to mitigate the negative water quality impact from discharging nearby 380,000 cubic yards of fill into the lake and the loss of 27 acres of water by adding another 30,000 cubic yards of fill to the lake under the guise of creating fish habitat. This proposal would allow ODNR to dispose the material from all but the two retained turnarounds constructed on the berm in the lake.

Several commentators said mitigating the impact of the initial fill with more fill made no sense. The proposed fish habitat, which could interfere with boating, was seen more as a cost reduction strategy for ODNR by allowing the inexpensive disposal of the now surplus fill in the lake rather than hauling it off-site. Several commentators proposed that ODNR address sediment coming into the lake. 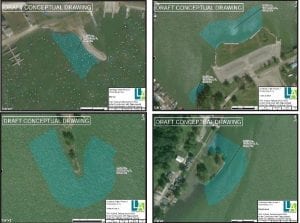 ODNR’s consultant filed a revised mitigation plan on September 20. The plan opens with “In response to the public comments… ODNR has developed additional mitigation measures…”

“ODNR has amended its mitigation proposal by (1) modifying the locations of two of the proposed fish habitat enhancement areas, and (2) including approximately 1,176 feet of bank stabilization along the Kirkersville Feeder Canal…”

“The proposed fish habitat at Fairfield Beach and Brooks Park has been removed from the mitigation proposal due to publicly expressed concerns about the fish habitat being incompatible with the boat traffic in the vicinity. Commenters noted concerns of potential damage to boat propellers when boating over the hard substrates during low lake levels. The Fairfield Beach and Brooks Park proposals have been abandoned and fish habitat is now proposed at Liebs Island, Mud Island, Sellers Point, and North Shore Marina. The proposed habitat at Mud Island will be in conjunction with the proposed fishing pier.”

The total acreage of the proposed fish habitat has been reduced from 18.57 acres to approximately 10.94 acres. The additional mitigation is to stabilize the bank along approximately 1,176 feet of the Kirkersville Feeder Canal, from downstream of the Millersport Water Treatment Plant to just upstream of the canal’s confluence with Buckeye Lake.

“The canal will be stabilized by contouring both banks to a 2:1 slope which will then be stabilized with riprap underlain with geotextile fabric.” See plan detail above.

“It is anticipated that the newly stabilized banks will be supplemented with native plantings as space and property access allows. The revised mitigation plan also proposes dredging some of the sediment along this section of channel in conjunction with the contouring of the banks to a 2:1 slope, which will effectively remove a portion of the existing nutrient rich material. The feeder canal and its tributaries are reportedly the primary contributor of external nutrient loading into the lake (Buckeye Lake Nutrient Reduction Plan). The re-contouring activities will also result in a slightly deeper channel that will allow for the installation of a series of check dams/sediment traps, which will essentially function as modified rock weirs. These check dams will promote riffle-run-pool complex development in the channel, which will provide some water quality improvements within the channel.”

“As a post construction monitoring plan for the bank stabilization along the Kirkersville Feeder Canal, 10-15 fixed point photograph locations will be established and monitored annually for 5 years. During the annual field monitoring photographs and any locations in need of adaptive management will be noted. An annual monitoring letter report will be provided by December 31 of monitor years 1, 3, and 5 to both the USACE and Ohio EPA. The first annual monitoring report will be provided at the end of the first full year following the completion of the bank stabilization work. If problem areas are noted, ODNR will be immediately notified following the field monitoring visit and adaptive management plans will be considered prior to being proffered to the Ohio EPA and USACE for approval.”