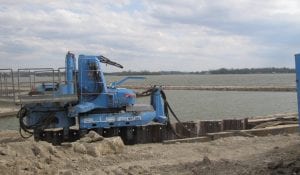 Top: Steel sheet piling was being driven this week on the west side of the Seller’s Point spillway. The causeway in front of the spillway will be removed and replaced with a single span bridge across the existing spillway walls.

BUCKEYE LAKE – We had some questions after ODNR’s last Construction Update on April 19. Our questions and ODNR’s April 30 response follows.

Beacon: What is being done at the AMIL gate (in Buckeye Lake Village)? We’ve heard that a suspension type bridge is going to be installed across the inlet channel to the spillway? Is that correct? Will the upgraded AMIL spillway still have a drain when the work is done? Will the current causeway in front of the Sellers Point spillway remain in place or will a bridge be built there as well?

ODNR: “The construction at Amil, Sellers and Crane Lake all involve the use of seepage controls and sheet pile to tie into the buttress in areas where soil mix work is impractical. All three areas will also feature a single-span bridge (across the inlet at Amil and Crane Lake and across the spillway at Sellers). Safety lighting and equipment to improve spillway operations will be installed at Amil with both the lake drain and spillway operational after construction is finished. At Sellers, where new lighting will also be installed, the causeway will be removed when improvements are complete.” 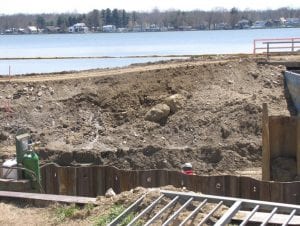 Top:Steel sheet pilings were recently driven on the north side of the AMIL spillway. The causeway at the top will be removed and replaced by a single-span bridge. Below: The drain pipes going over the Seller’s Point spillway are intended to increase spillway capacity due to the temporary cutoff at the AMIL spillway.

Beacon: Are the dock standards for docks along the dam completed? If not, when will they be done? If so, what are they?

ODNR: “The new dock standards are in the process of being finalized. As soon as they are ready we will get them to you. We will also make sure they are emailed out and posted on our website.”

We’ve also heard some rumbling about some type of project completion ceremony involving Governor John Kasich in early November. At last Friday’s, Buckeye Lake Region Chamber’s Full Pool Breakfast or more accurately Interim Summer Pool Breakfast, State Senator Troy Balderson said he had reached out to ODNR the week before for a project update. He confirmed that the lake will remain at or below the interim summer pool until October 1, when it will start returning to the interim winter pool until March 1, next year. Balderson said the dam will be finished by March 1 and the lake will start its rise to full pool. 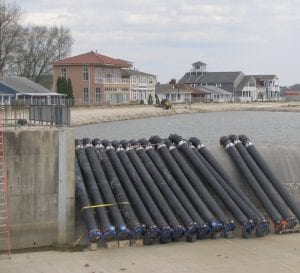