Analysis: No boating season in 2016 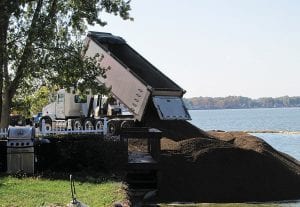 BUCKEYE LAKE – Headlines in area daily newspapers about a 2016 boating season on Buckeye Lake are far too optimistic. Sadly, the chances for any boat season next year without immediate relief from ODNR are slim to none.

Just to be sure, we checked with ODNR chief spokesperson Bethany McCorkle on Wednesday. She confirmed that the 30+ foot-wide stability berm must first be completed. Then ODNR’s dam safety engineers will “have to sign off on the berm to ensure there is no seepage and then we can close the gates.” Getting the OK on seepage shouldn’t be a problem because ODNR has been unable to pinpoint any seepage, in spite of numerous requests, through the existing embankment.

Unfortunately, seepage or in this case, potential seepage, is not the most critical dam safety issue. Overtopping after a probable maximum flood (PMF) is the biggest safety issue and the overwhelming cause for dam failure. The new stability berm does nothing to address PMF, particularly since its height will be lower than the existing dam. 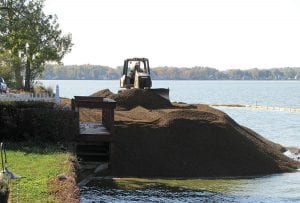 The PMF coverage requirement can be addressed four ways:

• Increase spillway capacity by lowering the spillway wall or enlarging its size;

• Increasing the height of the dam; and

• Armoring the top of the dam so it isn’t affected by overtopping.

ODNR barely mentions PMF, much less discusses how to reach the required 100 percent.

Even if ODNR is able to somehow finesse the PMF issue with their safety engineers much as they did the U.S. Army Corps of Engineers with the requirement for a 404 permit, there are still huge obstacles for even a short 2016 boating season. 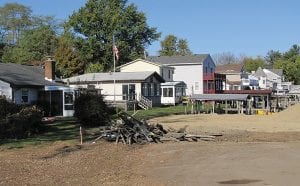 A month ago, ODNR’s handpicked Community Advisory Council was presented three possible work schedules for Phase 1 (construction of the stability berm). The group overwhelmingly favored the most aggressive which is working from 3:30 a.m. to 12:30 a.m., six days a week. ODNR estimated that the berm would be completed by early June with this schedule. ODNR also noted that its contractor might not accept this schedule and/or it could be too costly.

This schedule is not reasonable on a number of accounts. To be finished by June, much of the work must be done during the winter. Even if weather cooperates this year and we have a mild winter, supplemental lighting will be required for at least 11 hours each work day. That lighting pollution, coupled with the near-constant sounding of back-up alarms on the dump trucks and the dozer(s) spreading the bank run, will make life miserable for anyone living within a couple of hundred yards of the embankment. That noise, plus the sound of large trucks rumbling through residential areas 21 hours a day, coupled with the light pollution will ultimately make that schedule untenable.

There’s also the issue of bank run availability during the winter. Bank run is typically not mined in large quantities during the coldest winter months. There is little or no demand during those months and the below freezing temperatures make mining and handling the material much more difficult. If those obstacles are overcome, there is still the issue of safely dumping the material on the berm. Due to its relatively high moisture content, bank run often will freeze to the bed of the trailer, making dumping more difficult and potentially very dangerous. Frozen material in the head of a dump trailer can cause the trailer or the entire unit to turn over if it is not on solid, level ground. Repairing an overturned trailer or straight truck can be very expensive. Most dump trucks are independently owned, making the owners very cautious about losing a trailer. A couple of overturned trailers could quickly dry up the supply of trucks.

Some 21,000 truckloads will be required to supply the estimated 320,000 cubic yards of fill for the berm. If work starts Dec. 1 – that might be a stretch since ODNR is still negotiating an agreement with the Contraction Manager at Risk (CMR) – and is to be finished by early June, at least 3,500 truckloads must be delivered each month or 140 per working day. Winter weather conditions will stop work some days, pushing up the average daily deliveries needed to meet the schedule.

• A sufficient supply of bank run can be mined all winter long;

• Truck drivers are able to keep the bank run from freezing in the bed by using salt, diesel fuel or some other more acceptable freeze prevention agent;

• Nearby residents are some- how able to ignore near constant noise and nighttime light pollution;

• The cost for winter-time mining, trucking and 21 hours per day operation is acceptable to ODNR; and

• ODNR’s dam safety engineers are willing to ignore PMF until the last phase.

Well, we are still going to need extremely abnormal amounts of rain in July and August to reach safe levels for widespread boating anytime next summer. Remember, ODNR’s so-called ‘winter pool’ is three feet below normal summer pool. It is generally accepted that 890.75, one foot below summer pool, is sufficient for safe boating for most of the lake and channels. Some areas on the east end of the lake would still be touch and go.

Making up two feet of water starting in late June or early July will be very difficult. Unfortunately, we will need more than two feet of water by then. The lake’s most recent level is 888.09 and has been trending lower, reaching 888.04 earlier in the day. Net evaporation this summer cost us seven to eight inches below 888.75, so it would not be unreasonable to lose another four to five inches by next July. That means we would need to add nearly three feet via rainfall starting sometime in July before we could have even a near normal boating season.

Friends, that isn’t going to happen! We’re not that lucky. Nor will all the other obstacles be overcome.

ODNR’s berm plan is flawed from the start. It is NOT the quickest and least costly way to replace or repair the existing dam. Dr. Paul Rizzo outlined a much quicker and less costly plan at the A Better Dam Plan community meeting on Monday. The 30+ foot wide berm is an unnecessary and costly step if the object is to meet federal dam safety standards. Many residents suspect that ODNR has additional plans that require the new 30+ foot berm.

Whatever ODNR’s motives, expectations for even a short 2016 boating season are neither reasonable nor well founded. Remember, you read it here first!