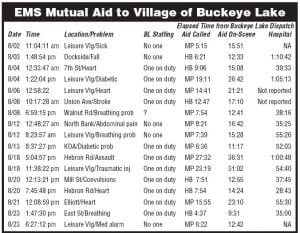 In fact, neither Baker nor Council President Charlene Hayden mentioned the problems or their Friday meeting with Fire Chief Pete Leindecker and Captain David Ruton in their reports at Monday night’s council meeting. Both did gush about the Buckeye Lake Historical Society’s August 23 fundraiser on Rownd Island. Tickets were $125 single and $200 for a couple. In the event of a medical emergency on the island, guests would be served by the Millersport Fire Department.

Both Baker and Hayden later spoke to Beacon writer Scott Rawdon as reported on Page 2. Both apparently believe the problem is communication with the department and plan to talk with them more.

It’s not a failure to communicate; it’s a total failure to perform. The initial responsibility belongs to Fire Chief Pete Leindecker. He’s paid $450 a month to schedule part-time EMT’s and paramedics to fill the three daily shifts

Leindecker has failed miserably for many months to meet this very basic performance standard.

We’ve added another month to our database since last week. Here’s the percent of shifts never even scheduled:

Leindecker blamed the problem on three people who quit in May. The numbers clearly don’t support that excuse. Kyle Weekly is the only part-timer who worked in April (one shift) and no longer works for Buckeye Lake. Otherwise, the part-time staff is the same for all five months.

The tally for unfilled shifts demonstrates Leindecker’s failure to fill unscheduled shifts as the month proceeds or to find substitutes when scheduled part-timers are sick or otherwise can’t or don’t show up.

Our first two analyses focused on two calls for help – one when no one was on duty (two should have been on duty) and the other when only one of the two day shift positions was filled. In both cases, the patients were transported by a mutual aid department after a significant delay.

This week we analyzed all calls for medical help within the Village of Buckeye Lake for this month thru Monday, August 27. There were a total of 33 calls for help. On 17 of them (52 percent), a mutual aid department – Hebron or Millersport – was ultimately dispatched to handle the call due to either only one person on duty or no one on duty. Hebron responded on 18.2 percent of Buckeye Lake Village calls for medical help. Millersport did the same on 33.3 percent.

The chart below details each one of the 17 assists. The additional delay in dispatching mutual aid ranges from 4:37 to 27:32. The extra delay in getting a crew or a fully staffed crew (at least two EMT’s) to the scene ranges from 9:31 to 36:31. Those delays can be deadly.

The delays caused by poor management and oversight are not a one or two off a month, but a regular occurrence.