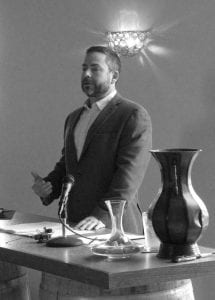 Steve Weitzner, President of Silverlode Consulting of Cleveland, presented the firm’s report on the economic impact to the Buckeye Lake area from ODNR’s decision to hold the lake water levels at “winter pool’ until the dam is replaced. He spoke to about 50 residents and local officials Tuesday morning at the Buckeye Lake Winery. Beacon photo by Charles Prince.

At the state level, job losses could exceed 1,336 with more than a $1 billion negative impact state-wide.

The devastating losses were calculated over the estimated five-year period needed to design and build the new dam. Steve Weitzner, President of Silverlode Consulting of Cleveland, presented the findings to a somber crowd of about 50 residents and local officials Tuesday morning at the Buckeye Lake Winery.

Silverlode was engaged by the Boards of County Commissioners of Fairfield, Licking and Perry counties. Columbus 2020 and the Ohio Rural Electric Cooperative also provided financial support for the study.

The report is based on 2013 data which is the most recent available. All dollars are based on 2015 values.

The three direct effect zip codes have almost 6,000 jobs in nearly 200 industry sectors. Silverlode identified 31 industry sectors with approximately 1,200 jobs as most likely to be affected by the loss of the lake’s recreational season.

Even assuming the new dam is in place five years from now, Weitzner believes it will take four to five years “to get back to where you were.” In other words it could be 10 years before lake area jobs and economic activity return to 2013 levels.

The economic impact is also understated since the report doesn’t quantify the impact of lower property values. “It is a difficult piece of the puzzle,” Weitzner explained. In Ohio, real property is reappraised every six years and updated every three years. Values are calculated on sales data. At this point, there is very little sales data as property owners are reluctant to test pricing levels so early in the five-year period. Taxes being paid this year are based on 2014 values and tax rates. Some owners are expected to seek property tax reductions next year as they seek to align taxes more closely to current values.

Weitzner acknowledged that the impact of lower property values could be very significant at the individual level. Its biggest impact will be in situations where circumstances – for example moving into an assisted living center – forces a sale in uncertain times.

The study also addressed the total labor income loss in the three-county area during the five-year low level period. The low to high range was $91.7 million to $161.1 million.