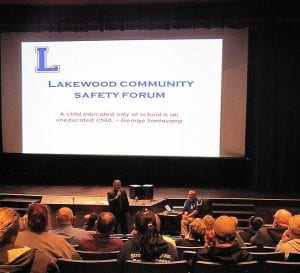 HEBRON – Four Lakewood students have been arrested in the past week for threatening to harm other students.

The most recent arrest was made Wednesday evening by the Licking County Sheriff’s Office. A 14-year old high school freshman allegedly responded to a school survey sent over the weekend to the school-issued Chrome books by “stating the intent to sneak a gun into the school and shoot a specific student,” Licking County Sheriff Randy Thorp said. Each Lakewood High School student is issued a Chrome book computer that is used at school and at home.

Thorp added that detectives were able to confirm the origin of the message. The student was charged with Aggravated Menacing and placed in a juvenile detention center pending a Thursday appearance in Licking County Juvenile Court. 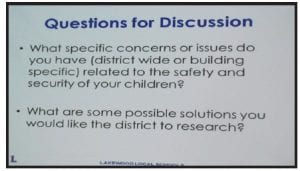 Classes were cancelled last Friday due to the first threat. Superintendent Mary Kay Andrews announced late Wednesday evening on the district’s webpage that district schools would be in regular session Thursday since the student is in custody.

Andrews opened the forum. “We take the trust you place in us very seriously,” she said. “We want your children safe and coming home to you each night.” She said the district has safety plans and training but could do more. “Obviously, that’s why we are here.”

Andrews said last week’s events “rattled our community.” She asked those present “to engage, discuss and disagree” in a “productive manner.” “Leaders need to be leaders,” Andrews said. “Adults need to be adults… We will make sure you are heard.”

Thorp said he is a proud Lakewood alumnus, adding that his daughter teaches at Lakewood.

“We take each one (threat) very seriously,” Thorp emphasized. “We have zero tolerance for school threats. That’s been our position for a long time.”

He added, “I’m a proponent of having law enforcement in the schools. We want the staff and students to concentrate on teaching and learning.”

Andrews said the next step was to break into small groups in the cafeteria, library and hallway to discuss two questions (see nearby photo). The small groups spent about an hour discussing the two questions. Each selected a spokesperson to share their comments with everyone.

One of the first comments drew loud applause – “Parents need to be talking to kids, disciplining kids and taking the teacher’s side sometimes.”

Nearly every group recommended at least one armed school resource officer. Some thought two were needed – one at the Lakewood campus and one at Hebron Elementary. Others thought every school should have one.

Having some teachers conceal and carry was suggested. Some groups specifically opposed arming teachers. Requiring students to have and display ID cards came up quite a few times. Checking ID’s to get on school buses was also suggested.

More counselors were recommended to help identify mental health problems earlier. Efforts should be increased to engage with students seemingly left out or not participating in classes and other activities. Anti-bullying efforts should be stepped up. Additional activities should be considered to get more students actively involved.

Some suggestions were clearly contradictory. For example, one group suggested a tight security perimeter around school buildings with only students and staff permitted to enter the buildings. Interactions with the public including parents would occur at an outside guard “shack.” Others wanted to bring more of the community into the schools possibly using parents to randomly check backpacks and parents/veterans to monitor the hallways.

Some operational suggestions would be fairly easy and inexpensive to implement. Fix the PA system at the high school so all classrooms can hear it. Come up with different alarms for fires, storms and an active shooter. Stairwells could be designated by color to make it easier to pinpoint a shooter or to explain an escape route. Make sure unmonitored doors are really secured; everyone knows about an open door at the high school.

A parent interrupted the reports to ask what is going to happen to the three boys arrested Thursday evening. She has a child in the same class. The middle school assistant principal said the school’s investigation started Monday and should be done by Tuesday. Any in-school consequences would start immediately. However, the Safety forum participants split into small groups to discuss these two questions. specific consequences would not be publicly announced. A question about whether parents could have their children moved out of the class if any of the three boys returned to school was not answered.

He said administrators talked with all middle school students on Monday. Students were reminded that threats are not a joking matter and that they recognize the power of words. “We reeducated them.”

Jessica Fry said, “Our kids today were fantastic. They were engaged and gave feedback.”

Returning to the reports, one group suggested lockers for high school students and banning backpacks from classrooms. Another suggested requiring students to use transparent backpacks, making it harder to conceal drugs and weapons. Adding metal detectors at entrances was suggested several times. Better barricades for class room doors came up several times along with using more security glass.

An issue raised at the February 14 school board meeting about holding high school students every morning in a confined area came up again. One group thought that arriving and departing students should be monitored more closely. A couple of groups had concerns that substitutes were not adequately trained on security issues.

The last group suggested self-defense classes for teachers and students.

In her summary, Andrews said, “We have learned from every event.” She said school safety plans aren’t public records so they can’t be shared with parents.

She thanked participants, stating, “We have a great list to categorize, prioritize.”

She also spoke about the difficulty of telling a student that their learning is over. “We do put interventions in place for expelled students,” Andrews added. “We follow them.”