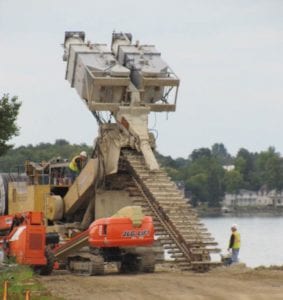 Top: DeWind’s reconfigured “Midget” hasn’t moved from last week. Mechanics seem to be focusing on the cutterhead drive assembly. Below: This is how much excess soil mixed concrete that flows out of the trench during the mixing process. It takes one to two pieces of heavy equipment to manage it. Beacon photos by Charles Prince.

BUCKEYE LAKE – Only the tumbleweed is missing.

ODNR’s dam replacement project looks more like a ghost town – minus the tumbleweed – than an active construction project. The staging areas at the North Shore and Lieb’s Island look abandoned.

The only activity Wednesday afternoon was a couple of men working on DeWind’s reconfigured “midget” at Seller’s Point. The now several-pass trencher didn’t move last week. It hasn’t mixed any soil since August 22.

Obviously that’s too long, even for ODNR, so we asked project spokesperson Ian Nickey about ODNR’s plans to address the apparently failed experiment with the one pass trencher. Here’s our questions: 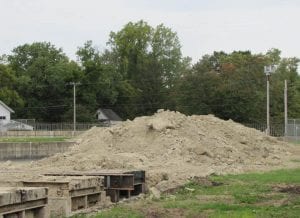 “DeWind’s one pass trencher for the buttress wall is obviously being reconfigured into a single cutter machine (from three) that will have to make multiple passes to complete the buttress wall. Here’s some questions:

2. Will additional trenchers (soil mixers) be added to the project as originally outlined in ASI’s Phase II contract to compensate for the loss of multiple cutter-head single pass machine? If so, when are the additional soil mixers expected to begin work on the project?

3. How many hours per day and days per week will the soil mixer(s) operate this fall/winter?

4. Is the buttress wall width at the surface still set at 10 feet? If not, what is its width?

6. Relative to your most recent construction update, will portions of the new sidewalk be installed during the winter or will the sidewalk installation work be delayed to spring?”

We didn’t get any direct answers to our questions. Here’s Nickey’s complete response:

“Thanks for reaching out. The completion date for the Buckeye Lake Dam Improvements project remains late 2018. Production has been affected due to the cutting chain seizing in the soilmix material. The soilmix machine boom and cutting chain has been removed from the supporting buttress element safely. ODNR is working with its contractors to address the issue while remaining on schedule and on budget. As final plans become available the project will update the public on changes to the work plan. The access path width remains approximately 12 feet. Crest work including removal of the old sidewalk and installation of a new sidewalk will begin mid- September and will conclude spring/summer 2018.”

Well that clears up everything – NOT! Here’s our follow-up:

“Does removed “safely” mean the seepage barrier was not damaged or destroyed during the removal process? What’s the width of the buttress wall at the surface? With an overall width of approximately 12 feet and a 2 ft wide seepage barrier, it would seem to be very close to 10 feet. Is that correct?”

Nickey did not respond.

So far, Nickey and ODNR are refusing to acknowledge that the 90-some day delay in starting the buttress wall and the rather obvious failure of the one-pass trencher will have any effect on the completion date. Their heads are stuck tighter in the trench than the three-wide cutter-head was last month.

Nickey’s most recent Construction Update (September 9) said crest work will start mid- September. The work includes grinding down tree stumps, removing the old sidewalk in 2,000- foot sections, moving any electrical boxes on ODNR property to private property, sheet pile trimming where applicable, stone wall removal where applicable, removing any other obstructions on state property and installation of a new sidewalk. The Update says this work will begin at Seller’s Point and move to Lieb’s Island. We’ve also heard secondhand that the work will begin at the North Shore. The recent grading of the berm along North Bank gives some credibility to that report.

The Update says the new sidewalk “will be offset from the property boundary by approximately four feet.” Given that the minimum width of an ADA sidewalk is four feet, the new sidewalk in some areas will be partially or almost completely on the stability berm. Installing the new sidewalk before the buttress wall is completed in that area doesn’t make sense.

Typically a couple pieces of heavy equipment – generally a hydraulic excavator and a dozer/ loader – are needed to manage the large volumes of excess soil mixed concrete that flow out of the trench. It’s difficult to see how that equipment and possible service equipment for the trencher can avoid striking or tracking on the new sidewalk, causing significant damage or destroying it in that area. A nearby photo shows the amount and extent of that excess material. The decision to start sidewalk construction now seems more of an effort to show some progress or get some contractors working than a properly sequenced construction task. ODNR has the cart (the new sidewalk) in front of the horse (buttress wall).

Nickey’s Update does state that one deadline will be met. “Drainage from homes or sump pumps must be redirected by October 1, 2017. As stated in the March 3, 2017 letter to residents on the Buckeye Lake dam, ODNR temporarily accommodated approximately 100 water drainage conduits by allowing their discharge over the top of the new embankment stability berm. After October 1st the project will begin permanently capping unauthorized drainage conduits so that they no longer discharge water through or over the dam.”

That deadline and removing the stop logs at the AMIL spillway in the Village of Buckeye Lake on October 1 to lower the lake to the interim winter pool are probably the only deadlines ODNR will meet this year. The West Bank Home Owners Association and the Parish farm discharges got a one-month reprieve.