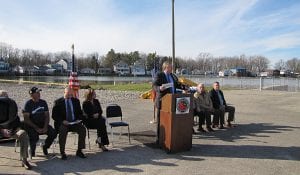 BUCKEYE LAKE – – Some details about the Buckeye Lake Dam replacement project are beginning to seep out.

ODNR Director James Zehringer staged an update press conference Monday afternoon in the Lieb’s Island boat ramp parking lot. “In my opinion, we’re ahead of schedule,” he told the small crowd of state and local officials. Standing in the parking lot, now totally enclosed by a six-foot high chain link fence and shorn of about a dozen trees, he said Buckeye Lake is a beautiful state park.

Zehringer stayed on script commenting on how ODNR learned last March about “the possibility of a catastrophic event” when they received the U.S. Army Corps of Engineers’ review. He again emphasized that while ODNR is aware of the impact of the low lake level on residents and businesses, the first priority remains public safety. His priority is “getting this done on time, on budget and safety.”

Zehringer ticked off a list of accomplishments including getting the USACE permit in just a couple of months compared to years in some cases, selecting soil-mixing as the design concept, starting work on the three staging areas and selecting a construction manager. 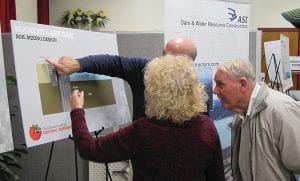 “ASI (the construction manager) is noted throughout the country for soil mixing and dams,” Zehriger said. Pete George has been hired as the full-time dam tender. ODNR also organized an advisory board of “community-minded individuals.” “We asked for your input on a few things,” he added. That board held its third meeting Monday evening. ODNR officials don’t attend the advisory board meetings. The ODNR-selected group just meets with representatives of the outreach subcontractor and the engineering firm.

ODNR Chief of Projects Steve Berezansky said, “We heard you – Let’s get this done and as quick as possible.” With a “very aggressive” work schedule and hours, Phase 1 is on track to be complete in June.

Phase 1 consists of the 30-35 foot wide stability berm constructed with bank run along the face of the current embankment and the completion of the seepage cut-off. Once that’s complete, ODNR’s dam safety engineers will have to sign off on the improvements BEFORE the spillway gate is closed. 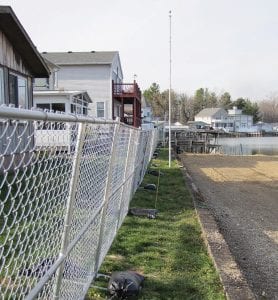 “We will be looking for some rain to help us out,” Berezansky acknowledged.

He briefly mentioned the 300-some docks along the dam. About a quarter of them were removed by residents and about 160 residents signed waivers allowing ODNR to have them removed. That leaves about 75 or so in limbo. Docks removed by ODNR will be stored on-site at Lieb’s Island “for a few months.”

Zehringer gave State Senator Jay Hottinger and State Representatives Bill Hays, Scott Ryan and Tim Schaffer an opportunity to comment. Hottinger said the goal is to “return life back to normal at Buckeye Lake as soon as possible.” He acknowledged that “a thousand different things can happen,” but when its done we will have a “dam that is safe, a lake that is healthier and a business community that is stronger than ever. Schaffer added, “The doors are always open.” Ryan said, “We don’t underestimate your pain and sacrifice.”

Buckeye Lake Area Civic Association president Ron Craig used his time to ask Zehringer to “close the gates as early as possible this spring. If we have to wait until June 1 for water, we will can this year.” He also asked ODNR to increase the project’s transparency.

Zehringer quickly responded, “We’re going to make sure everything is safe first.” He added ODNR will be “as transparent as possible.”

Calling it “exciting news on the dredging front,” Zehringer asked ODNR Deputy Director Gary Obermiller for an update. This was the first year with two dredges working at Buckeye Lake, he said. A third state dredge will be added next year along with a private contractor. A de-watering unit that will allow dredged material to be immediately trucked away rather than draining for several years in a disposal pit is being moved here this fall from New York state, Obermiller added.

He later acknowledged to The Beacon that the dredging program wasn’t as successful as hoped for this year. The third state dredge has actually been here all along; it is the long-time Buckeye Lake dredge that spent the dredging season stuck on the bottom of the lagoon behind the park office. It will be used next year to pump silt onto farmland and will be used as long as disposal capacity is available.

The private contractor’s eight -inch intake dredge (the state dredges are 12 inches) will dredge silt to be placed in an expanded disposal site along the Feeder Creek. Due to its design, it can only be used on silt, according to Obermiller.

In individual conversations following the press conference and at Wednesday night’s open house in Buckeye Lake, it is unclear whether the seepage cutoff (the soil-mixed columns) will have to be installed the entire length of the new dam before water levels can be raised. Also unknown is how wide that barrier will have to be. There are several ways to do soil mixing in widths typically ranging from 24 to 36 inches. Soil mixing paths will be overlapped to achieve the size of the required barrier. The seepage barrier design won’t be done until sometime in January.

We’ve heard two dates for the start date on the stability berm construction. “Before the end of the year” by project engineer Gannett-Fleming and Monday, Dec. 14 by ASI Constructors’ estimating manager Rich King. King is on-site lining up the contractors that will actually do the work. Bids are coming due now to the second week of December.

King said Wednesday evening that fencing will start going up Nov. 30. Several hundred feet are already up on the Lieb’s Island end of the West Bank. It’s now a five-foot high, portable chain link fence. The 10-foot long sections are supported by foot stands held down by sand bags so there are no posts into the embankment. The design includes sections every 100 feet or so marked by reflective tape that can be opened by removing a couple of pins. Fence installation will proceed ahead of the berm construction.

An ODNR Temporary Fencing fact sheet states that residents along the dam must “immediately move all personal property and private improvements constructed or placed in the area between the lake and homes at the crest (midpoint) of the dam to allow for fence installation. This includes chairs, swings, patios, grills, picnic tables, satellite dishes, flower pots, etc. Any remaining property not moved at the time of fence installation will be removed and discarded.”

Plans now call for the bank run to be delivered to staging areas at the North Bank park area and Lieb’s Island. The road trucks will dump in stockpiles on the parking lots where it will be reloaded into off-road articulated dumps that will then dump it into the lake to build the stability berm. King believes it will take three months to complete the berm, working both from the North Shore park and Lieb’s Island.

Building the seepage barriers will start in early February with two soil mixing machines, one starting at the North Shore and the other at Lieb’s Island. These machines are large and have to move on special pads for stability. “Much improvement (in the time schedule) by the first of June is unlikely,” King told The Beacon.

Once the stability berm with the seepage barrier is completed, the berm in most areas will be pulled back to a width of 15 feet., according to Robert Kline with Gannett-Fleming. The lake side of the berm will be faced with concrete, either pre-cast panels or cast in place. The remaining berm which includes the seepage barrier will be capped with concrete. Details, according to Kline, will be worked out next year on what will be placed on top of the new concrete cap and the current embankment.

Most of the trees on the dam will be removed. Any tree with a canopy over the new berm will be removed as a possible construction hazard as will be any damaged or dying trees. Some homeowners also have asked for trees to be removed. One report estimates that only 24 trees will be left along the dam.

Odds for a even a short 2016 boating season are still very long. Just one of the pitfalls outlined in our Oct. 24 analysis has been addressed – difficulties in using road trucks to place the berm material in the lake.

The only salvation for a 2016 boating season depends on ODNR agreeing to focus seepage barrier construction on the areas of greatest concern, most notably portions of the West Bank. That focus means the most critical work could be completed before June, significantly increasing the odds that rainfall might be enough to reach a safe boating level before the season ends.

A very slow and closely monitored fill starting in the spring could also save some of the boating season. Otherwise, waiting for a best case early June completion and subsequent inspection leaves far too little time to accumulate enough water for safe boating.

Remember, it typically takes two rainy spring months to add two feet to reach full pool. By next summer we’ll need at least three feet to be one foot short of full-pool which is sufficient for boating on most of the lake and channels.