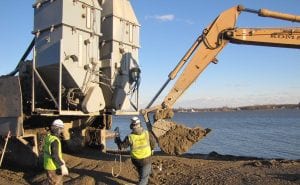 BUCKEYE LAKE – Completion of the 10-foot wide buttress wall behind the two-foot wide seepage barrier (completed in May 2016) is the key factor in determining when the lake will return to normal levels. Returning the lake to normal levels will revitalize our struggling local economy.

ODNR’s contract with ASI for Phase II called for four soil mixing machines to built the buttress wall. At some point – most likely due to an effort to save money – ODNR, ASI and DeWind agreed to substitute one machine supposedly able to construct the buttress wall in one pass.

That decision to use just one “monster” machine may have been responsible for the 90-day delay in starting wall construction – late June start versus the scheduled March start. The sale of ASI Constructors’ assets in April to Shaft Drillers International of Mount Morris, PA, may have contributed to the delayed start-up.

The one-pass experiment failed, wasting almost 90 days. The trencher frequently broke down and its cutter arm got stuck in the trench for some four days in August. That prompted a cutter head reconfiguration, reducing its width from 10 feet to a little over three feet. DeWind brought in a smaller trencher in late September. Even with two trenchers, progress appeared erratic through October. Up-time improved considerably during November and seems to have continued into December.

ODNR’s Phase II contract with ASI lists January 10, 2018, as the date the buttress wall is to be completed. That’s less than four weeks away. In her latest Construction Update (12/11/17), Evans said, “The two-shift work plan implemented Dec. 1-7, proved successful in maximizing efficiency and productivity and so will be used until further notice with a pause in trenching from Christmas Day through New Year’s Day.” Given that eight-day shutdown, it’s reasonable to project that 25-26 percent of the buttress wall will be completed by the original deadline. Most of that work was done in the last two months. However, it is probably too optimistic to project that the rest of the buttress work will be done at the rate of 25 percent every two months. Even if that pace could be maintained, that would push completion to late June – six months behind the original schedule.

Evans also cautioned, “All completed work remains subject to acceptance testing and approval by ODNR; and depending on testing, additional work may be required in some of these areas.”

While some of the remaining components – concrete cap over the buttress wall and seepage barrier, dock pads, asphalt roadway over the concrete cap, new sidewalk, turnaround removals and rip rap installation – could be done concurrently with buttress wall construction, some of these projects are likely to extend well into 2019. The timing of the bank grading and rip rap installation is likely to be critical to returning to normal pool levels. We suspect contractors will want to keep the lake at the interim pool level to make it easier to place the rip rap.