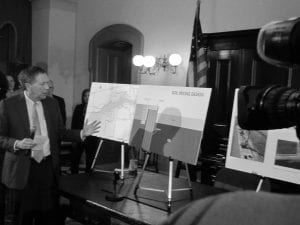 Ohio Governor John Kasich explains the design concept for the new Buckeye Lake dam in the Lincoln Room in the Ohio Statehouse on July 16. Beacon photo by Charles Prince.

COLUMBUS – Some tangible progress is now being made on replacing the Buckeye Lake dam.

Ohio Governor John Kasich presented what he termed “a little bit of an update” last Thursday afternoon in the Lincoln Room in the Ohio Statehouse.

“I salute the people that live at Buckeye Lake,” Kasich said. “They have been model citizens.”

He introduced Steve Berezansky, ODNR Chief of Projects, as “the guy that told me that he doesn’t sleep at night when big storms roll over Buckeye Lake.”

“They (ODNR) came to me with the process about a month ago,” Kasich added. “I said I’m not happy with this. Has it been checked three times?” The governor asked them to check with the Army Corps of Engineers.

Kasich added that work may begin sooner and finish earlier than originally expected. “It may be shorter than the five years we thought,” he said. “We might be able to see a little higher level of water. It could be next year. It might be longer.” 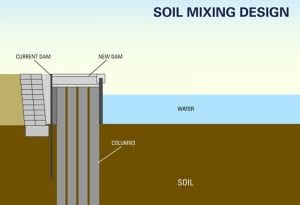 This conceptual cross-section provided by ODNR shows the the existing dam at the far left. The brown vertical columns are the constructed soil mixing columns. Courtesy ODNR.

Berezansky briefly described the soil mixing process that is the key design element in the new dam. Soil is mixed with cement to create vertical piers that will stabilize the new dam. He said it is a very effective seepage barrier and is cost effective.

During a very brief question and answer period, Kasich said, “I’ve become convinced that this (design) is going to work.”

Berezansky said, “I like to get things done. I do not look back.” He promised transparent communications. “We have to move past it. Let’s treat each other with a level of respect.”

He characterized the Rizzo report as “money well spent,” adding, “We would appreciate talking with Dr. Rizzo through the process.”

The first construction step is to build an embankment stability berm in front of the existing dam. That berm will be up to 30 feet wide for construction. Its final width will be determined during the upcoming design phase. A drill will mechanically mix the berm soil with cement. The depth and number of rows of these piers is to be determined.

The berm will be built with bank run or “engineered fill,” Berezansky said. It won’t be dredge material. “We want something compactable,” he explained.

Work is expected to start at multiple points along the 4.1 mile long dam. ODNR recently cleared three waterfront lots just north of the Seller’s Point spillway to improve access to that portion of the dam.

The new dam will be faced to protect it from wave damage with sheet piling or concrete panels. “Right now we view it (the face) as vertical,” Berezansky said. The gap between the old and new dams will be backfilled. He said the soil for the berm will just be dumped into the lake as they don’t plan to build any cofferdams.

“It is not our intention to raise the height (of the dam),” Berezansky said. However, lower areas will be raised so the dam has a uniform height.

The new dam will be capped, most likely with concrete. The width of that cap is to be determined. In response to a question about the depth of water in front of the new dam, Berezansky said, “We would like to clean up some things in the front.” He expects the water to be deeper.

He responded to a question about docks as getting “to the heart of the matter.” Docks will have to be removed for construction and new docks will not be directly attached to the dam. “No concept yet on dock design,” Anthony said. “We’ll have to sort it out together.”

Issues include whether the docks will be on pilings or floating and whether they will be reconstructed in front of homes or clustered together in groups.

Meeting moderator Tim Figgins of the Buckeye Lake Region Chamber of Commerce asked how ODNR will seek public input. “We’ve been burning up the phone lines,” Anthony told him. He’s proposing something more formal – forming a citizens advisory board. Anthony also wants to do more open houses like those held last fall. “I want to establish a dedicated phone line for you to call in,” he added.

Responding to a question about the timeline, Berezansky said, “We’re not there yet. We need some time to get the design details.” He mentioned how deep the piers would have to be drilled and how many rows would be needed. Soil mixing can continue during most of the winter.

A few more details emerged Monday after the state Controlling Board released $8.4 million to Gannett Fleming Engineers & Architects to provide professional engineering services for the project. The Camp Hill, PA, firm has an office in Westerville.

The Gannett contract sets a $100 million construction budget. $561,330 of Gannett’s fee is allocated for “Stakeholder Outreach (Phase 1). The public involvement consultant is Hicks Partners, LLC of Columbus. Brian K. Hicks is the principal.

Karl R. Rohrer Associates of Akron is the marina and dock design consultant. There is not a specific budget allocation for this activity.

• Provide a master plan for the entire structure including evaluation and implementation of the Interim Risk Reduction Measures as recommended by the Army Corps of Engineers;

• Identify opportunities and assist in implementation of water quality improvements in Buckeye Lake and its tributaries.

ODNR’s Request for Qualifications for the Construction Manager was issued July 22. Statements are due Aug. 20. ODNR expects to short list a maximum of three firms by Aug. 27, that in turn will be asked to submit detailed pricing proposals by Sept. 14. ODNR hopes to select the construction manager by Sept. 23 and issue a Notice to Proceed on Oct. 20. All schedule dates are subject to change.

• No work will be required on properties not owned or leased by the State:

• The scope of services includes construction of cofferdams, temporary and permanent modifications to concrete spillway structures, working from barges, construction of seepage barriers and administration of lake level control plans; and