The issue first arose during public comments at Monday evening’s village council meeting. Former Council President Charlene Hayden complained about a political sign in Cranberry Bay that she said violates a rule limiting the display of political signs to a maximum of 30 days prior to an election. Hayden declined to describe the sign, prompting Mayor Peggy Wells to state that Hayden was likely referring to her pro-Lakewood levy sign. Hayden said it wasn’t Wells’ Lakewood sign.

Ruton quickly demanded that the sign be removed per village regulations. When Wells asked if she was demanding that she remove her Lakewood sign too, Ruton said it was “different.” Wells then asked this writer if her recollection that the Supreme Court had addressed this matter was correct. She was told that the Supreme Court of Ohio had found similar restrictions on political signs unconstitutional.

Ruton continued to insist that the village regulation applied, claiming she had checked with the Board of Elections on the matter. The sign was eventually identified as belonging to Village Council candidate John Lemmon.

A five-minute Google search last evening confirmed this writer’s belief that the Supreme Court of Ohio had already addressed this issue. The Court, in a unanimous decision on September 6, 2000, in City of Painesville Building Department, Appellant, v. Dworken & Bernstein Co., L.P.A., Appellee, wrote, “We therefore hold that Planning and Zoning Code Section 1135.02(d) of the Codified Ordinances of the city of Painesville, which precludes the posting of political signs except during the period extending seventeen days preceding any primary election, general election, or special election until forty-eight hours after the election, violates the First Amendment to the United States Constitution and is unconstitutional when applied to prohibit the owner of private property from posting on that private property a single political sign outside the durational period set by the ordinance.”

The unanimous Justices also noted that the First Amendment to the United States Constitution provides that Congress shall make no laws abridging the freedom of speech, adding that “the First Amendment is applicable to the states and to political subdivisions of the states by virtue of the Fourteenth Amendment.” The Ohio Justices also wrote, “Similarly, Section 11, Article I of the Ohio Constitution states that ‘[e]very citizen may freely speak, write, and publish his sentiments on all subjects, being responsible for the abuse of the right;  and no law shall be passed to restrain or abridge the liberty of speech, or of the press.’”

Ruton, who routinely opines on legal issues during Council meetings, was still insisting Tuesday morning that a village regulation, now identified as a zoning regulation, trumps a Supreme Court of Ohio unanimous decision and the U. S. and Ohio constitutions. She wrote Wells and council members:

All,
I have checked with both the Board of Elections and the State on the political signs.  Both have stated that it is up to the Municipality’s zoning regs regarding when political signs can be put up.  The Village does have zoning regs regarding this issue.  Both Peggy and John Lemon are in violation of article 11, 11.02 number 8 (Signs that do not need a permit).   Political signs cannot be put out till 30 days prior to the election.  The signs/sign that Mr. Lemon and Peggy put up must be taken down.  All signs can be put up on Oct. 7th.  Any question please let me know.

Wells told The Beacon Tuesday afternoon that she had also checked with the Brian Mead, Executive Director of the Licking Board of Elections, about the issue. He told her that local zoning regulations can address political signs at the risk of being sued and found to be unconstitutional. Wells, who is acting as the village’s zoning inspector until a new inspector is appointed, told The Beacon, “No one has to remove any political signs from their own property. I respect Supreme Court of Ohio precedent and the U.S. and Ohio constitutions.” 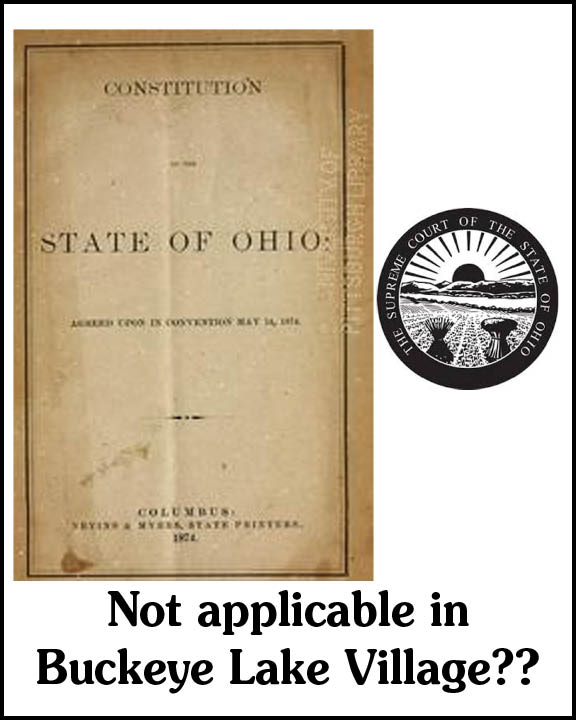