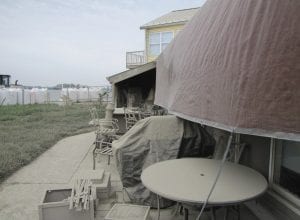 Thanks to a sleepy truck driver, a silo on the nearby concrete bulk plant was overfilled sending a large cloud of Portland cement over the neighborhood around 5 a.m. OSHA considers Portland cement hazardous due to its skin corrosion/irritation, eye damage, skin sensitization and carcinogenicity/inhalation effects.

The hazardous dust quickly settled on houses, vehicles, foliage, walkways and two pet dogs. It looked like a skiff of gray snow had fallen. Ohio EPA reports that its emergency spill line was contacted at 6:30 a.m. Saturday morning. That was apparently the first and last emergency notification. Licking County EMA was not contacted or consulted nor was the county’s Haz/Mat team. EMA Director Sean Grady confirmed that there were no 9-1-1 calls nor were any area fire departments asked to assist in any matter.

In response to a number of Beacon questions, Ohio EPA spokesperson James Lee said ASI subcontractor Riato “indicated that between 0.9 and 1.2 tons were released. Raito’s two bulk plants just received their required Ohio EPA operating permits on April 27. A neighbor’s complaint about dust lead to an Ohio EPA inspection on April 19 which discovered the two plants had been operating illegally without permits for weeks. Riato submitted permit applications on April 25.

Their permit states that for Portland Cement silos the particulate emissions (PE) “shall not exceed 0.21 ton/yr.” That annual limit was exceeded up to six times in a few minutes early Saturday morning.

Here’s ODNR’s complete response to our questions about the incident and emergency contingency plans in general. The questions were directed to project spokeperson Ian Nickey and ODNR spokesperson Matt Eiselstein. Nickey responded:

“ The project contractors and ODNR worked quickly and effectively on Saturday to keep the public safe during an accidental release of cement dust. Steps were taken to prevent environmental contamination and mitigate damage to property. The cement being used is a common product that is no different than the product anyone can buy at a hardware store. The cause of the incident is currently being attributed to a delivery driver failing to follow proper procedures while off-loading. The primary focus of this project has always been and will remain the safety of the public. The contractor responsible for the project site is working closely with the affected residents and will have an insurance claims agent onsite within the next five to seven business days. 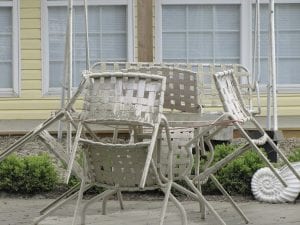 Additional staff will be onsite while trucks are offloading material and the transport company has reiterated proper off-loading procedures to its employees making deliveries to the site.

Since the beginning of the project a full-time safety manager has been onsite and there are hazardous materials response plans in place.” 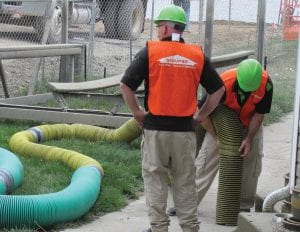 After spending more than five hours on-site late Saturday morning and most of the afternoon and speaking with some neighbors, Nickey’s summation sounds like he was somewhere else that day. He was on-site.

No objective observer could term ODNR’s and the various contractors’ actions quick or effective. Yes, most residents were notified and most were given common hardware store dust masks. Some residents were offered free car washes and the dogs’ owner will be reimbursed for grooming services at a vet.

Clean- up efforts were pathetic. Three ServPro units arrived about 11:45 a.m., just as the forecasted light rain began to fall. An attempt to use a furnace duct cleaning vacuum to remove the heaviest coating quickly failed. It took about 30 minutes to get the equipment in place and the vacuum bag couldn’t contain the fine dust. A second bag was placed over it with better results, but as the rain picked up it was obvious that the equipment was not up to the task. An attempt to use carpet cleaning equipment outside also failed quickly. 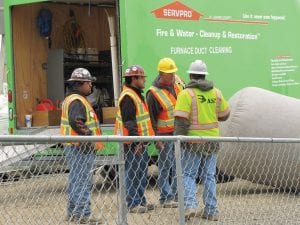 The ServPro crew worked quickly and with much energy. The scope of the cleanup was simply far beyond the capability of their equipment.

This writer asked Nickey and later ASI General Superintendent Kevin Switzer why nearby MPW had not been contacted. MPW is headquartered on Ohio 37 just north of I-70, providing sophisticated industrial cleaning services nationwide. Switzer said their subcontractor, Raito, had selected the cleanup contractor. He later reported that MPW had been contacted only to be told that the company doesn’t respond on weekends.

MPW founder and CEO Monte R. Black assured The Beacon on Tuesday that “no one at MPW will tell anyone that they don’t respond over the weekend.” He added that MPW responds 24/7 and that industrial vacuum trucks and large pressure washing units were immediately available. 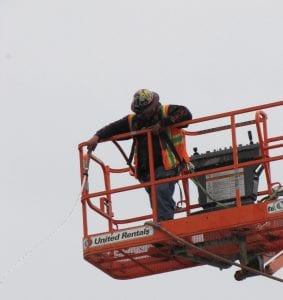 Black responded from Texas to a Beacon email inquiry in about 15 minutes. A MPW Business Unit manager called The Beacon a few minutes later to see if services were still needed.

On Saturday afternoon, the cleanup focus turned to pressure washing, but water pressure proved to be a problem. Meanwhile, the steady light rain was turning the cement into a thin concrete coating. Some areas were repeatedly pressure-washed while others were virtually ignored. ServPro packed up around 6 p.m.

No work or cleanup was done Sunday, but one engineer told an affected resident that a professional pressure-washing firm would be arriving Monday. That didn’t happen and affected residents have now been told that the next step will be a visit from a California-based insurance adjustor. When that adjustor will arrive is not known.

Concerns extend beyond property damage which is extensive as roofs, siding, decks and stonework appear to be permanently discolored, etched or both. Finish on some vehicles also appears to be affected. 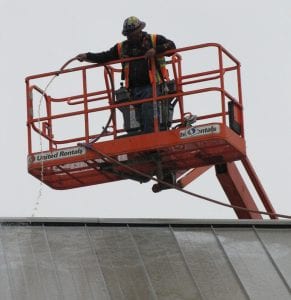 Some bulk plant neighbors are reporting respiratory problems as well as eye and skin irritation. Health concerns are heightened when residents see the extent of the discoloration and pitting on stone, metal, wood, plastic and asphalt surfaces.

At this point, Ohio EPA has not issued a Notice of Violation to Raito. Lee explained, “As part of the air regulations, if a plant has a breakdown or failure of equipment, like what happened when the silo was overfilled on Saturday, it’s considered to be a malfunction. If a malfunction occurs, the facility is required to immediately report the incident and stop operations if possible to prevent further emissions. In this case, the company quickly informed Ohio EPA, shut down the operations and provided information about the event. Because they met all of the requirements of the rule and this appeared to be an isolated incident caused by human error, no violation letter has been issued at this time.” 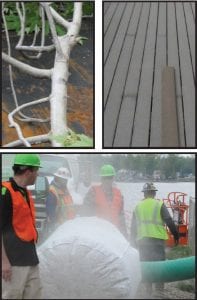 From top left clockwise, a tree branch from a tall Maple tree is coated with a thin layer of concrete; discoloration of a recently built deck compared to original color; and furnace duct cleaning vacuum recycling dust.