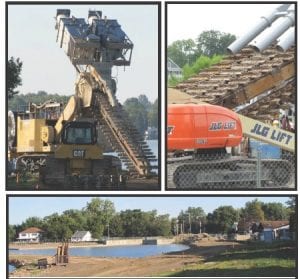 Clockwise from top left: The reconfigured “Midget,” the original “Monster” and the current work area from the Seller’s Point spillway to the causeway. Beacon photos by Charles Prince.

BUCKEYE LAKE – After DeWind’s custom-built one passtrencher finally arrived at Lieb’s Island in mid-June, we began calling it “the monster.” It was supposed to soil-mix the 10-foot wide buttress wall in one pass, replacing the four soil mixing rigs originally specified in the Phase II contract.

After nearly 90 days on-site, “the monster” seems more like “the midget.” It’s completed about 600 feet of buttress wall since mid-June, taking weeks to finish the 500-foot test section on West Bank. Project spokesperson Ian Nickey told The Beacon on August 2 that the trencher “will be moving to Sellers Point this week. The machine will complete the small section between the north-east side of Sellers Point spillway and the causeway…”

“The midget” was about 30 feet into that approximately 400- foot stretch on Tuesday afternoon August 15, when the cutterhead got stuck in the soil mixing trench. Efforts to free it were unsuccessful and it was uncoupled from the power unit. Workers tried pulling it out with a hydraulic excavator, shaking it back and forth like a fence post to loosen it and drilling around it with another excavator – all to no avail. Workers spent about 40 daylight hours trying to free it before a very large crane was able to pull the cutterhead unit out on Friday, August 18.

After being reinstalled on the power unit, a neighbor said the trencher resumed soil mixing on Tuesday afternoon, August 22. By the time we arrived mid-afternoon Wednesday, August 23, the unit was already shut down for repairs. It had mixed another 60 – 70 feet of buttress wall for a total of about 100 feet – about a fourth of the way to the causeway connection.

“The midget” was then moved to Seller’s Point where its cutterhead and track were removed and reportedly taken to Michigan for repair and reconfiguration. A cutterhead assembly was being installed Wednesday afternoon (Sept. 5). It now appears that the one-pass “monster” has been converted to a two-pass “midget.” The new cutterhead appears to be about five feet wide compared to the earlier 10 foot width.

We haven’t yet asked Nickey whether any additional soil mixing rigs will be added to the project. We have heard reports that the 12- hour workday, five days a week, will soon be increased to an 18-hour workday, five to six days a week. But unless the narrower cutterhead resolves the mechanical problems that have plagued the “monster” since its arrival, the longer workday will have little effect.

With the former one-pass “monster” apparently turned into a two-pass “midget,” it will likely require one or two more soil mixing rigs to finish the buttress wall in 43 weeks from now. That’s June 30, 2018, some 42 weeks after the scheduled completion of the buttress wall.

While some tasks can be done concurrently with buttress wall work, a 10-month plus delay in the wall’s completion will likely push final completion well into 2019, affecting the lake recreation season for the fifth consecutive year.