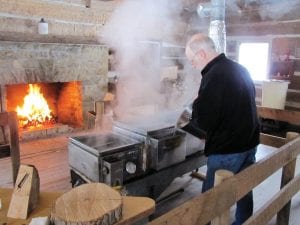 JACKSONTOWN – Dawes Arboretum botanist David Brandenburg said that bottle of pancake syrup bought at the grocery store may contain no maple syrup at all. In fact, it may be sweetened with a product commonly found in Indian and Near Eastern cuisine, he said, as he poured another bucket of sap into Dawes’ sugar shack boiler. Tuesday morning was Brandenburg’s shift to mind the shack during Dawes Arboretum’s annual Maple Syrup Madness, which runs through March 6.

People rarely look at maple syrup production from a botanist’s perspective, said Brandenburg. People buy pancake syrup at the store believing there’s actually real maple syrup in the product. Not so, he said. Most of the store bought breakfast syrups are sweetened with fenugreek seed, frequently used in the preparation of pickles, curry powder, and pastes. The seed can taste unusually similar to maple syrup when ground and dried. Brandenburg said people read “natural ingredients” listed on pancake syrup labels and assume it has something to do with a maple tree. In truth, it has far more to do with herbal medicine. 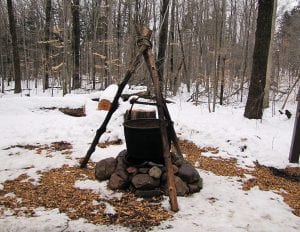 According to fenugreekseed. org, the seed is used in hair conditioner, Ethiopian bread, Egyptian tea, is sometimes used as an alternative diabetes treatment, and as an aid to lactating women.

But, enough about fenugreek seed. This week and next are all about the production of real maple syrup at Dawes. As of Tuesday, the flow of sap from the trees was surprisingly slow. According to the Cornell Sugar Maple Research and Extension program, here’s how sap flows: Early in the spring, when the maple trees are still dormant, temperatures rise above freezing during the day but drop back below freezing at night. This fluctuation in air temperature is vital to the flow of sap in sugar maple trees.

So, what causes the sap of maple trees to flow in the spring? During warm periods when temperatures rise above freezing, pressure (also called positive pressure) develops in the tree. This pressure causes the sap to flow out of the tree through a wound or tap hole. During cooler periods when temperatures fall below freezing, suction (also called negative pressure) develops, drawing water into the tree through the roots. This replenishes the sap in the tree, allowing it to flow again during the next warm period. Although sap generally flows during the day when temperatures are warm, it has been known to flow at night if temperatures remain above freezing. 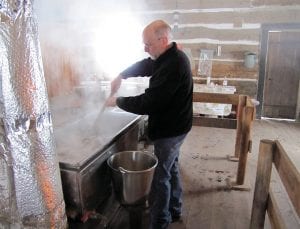 The bottom line is that maple syrup production is time consuming and difficult, prompting some syrup manufacturers to take shortcuts. But, whether it’s from a botanist’s perspective or just someone who really enjoys waffles, there’s no substitute for the real thing.

Maple Syrup Madness run through March 6, 10 a.m. to 4 p.m., Monday through Saturday, and 1 to 4pm, Sunday. Sap will be drawn right out of Dawes’ own sugar maple trees and boiled down to sweet smelling syrup. Take the trail on a self-guided adventure, attend a Saturday 2 p.m. public tour, or sign up for a group tour with the Education Department. 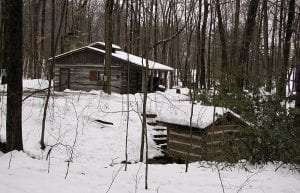