Floodwaters subside at the last minute

LAKE AREA- Memories of January 2004 and 2005 made lake area residents nervous as flood waters rose to dangerously high levels Monday evening. This year, however, Mother Nature gave us a break, even as water started to cover the I-70 exit ramp to SR 79 south. By Tuesday afternoon, the flood waters from this month’s steady rains began receding. For two consecutive months of January, 2004 and 2005, flood waters completely covered I-70 near the SR 79 interchange, backingup traffic for hours. Overflowing rivers forced many residents, particularly those in the Buckeye Lake Estates near the Buckeye Lake Village, to flee their homes. Buckeye Lake State Park Manager Tim Waln said Buckeye Lake didn’t even make it up to summer pool depth during the hard rains that pelted the Buckeye Lake Area during the Jan. 13, 2007 weekend. “We were able to stay down where we need to be,” he said. Tuesday morning Waln wasn’t aware of any significant local flood damage. Waln said state park employees are working hard this year to keep the regulatory spillway clear of debris so water doesn’t pour over the Seller’s Point spillway and into the Licking River, which has been a major contributor to past flooding. “Just think if were 20 degrees colder,” said Waln. “That would’ve been a lot of snow!” 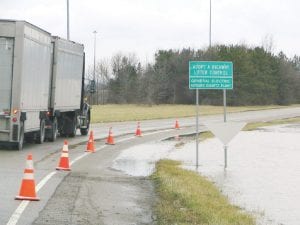 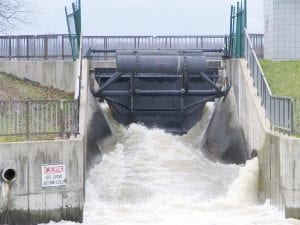