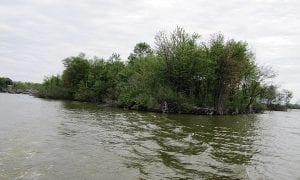 BUCKEYE LAKE – Now that Buckeye Lake’s famed Cranberry Bog is under the Buckeye Lake Historical Society’s management, it’s receiving a facelift, of sorts, beginning with clearing harmful brush from the bog’s surface. “For this year we are just clearing the area that the bog tours take place in,” said Buckeye Lake Museum Director J-me Braig, “around the boardwalk and two of the meadows. We are really just cutting back all the poison sumac so that the cranberry plants and the other rare species get sunshine and are not crowded out by the poison.” She said the sumac, which can cause a severe rash similar to poison ivy when it contacts skin, is also being cleared for visitors’ protection.

There is a nearly endless list of improvements Braig said the bog needs, but the bog’s aging boardwalk tops the list. The boardwalk is planned to be replaced sometime this year but probably won’t be until fall, she said. “We have to raise the funds for that,” said Braig. “We already have received a $500 donation from a Garden Club. We will pitch this to all the clubs that come on the tours this summer. We really can’t replace it this summer, as we need to have it open for tours.” Braig said the existing boardwalk is in fair shape but does need an update. 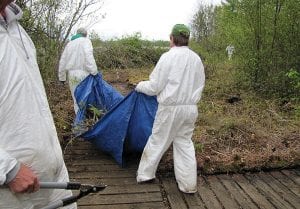 Braig said the bog’s main dock is in fine shape. “We are working to get signage on the east and west end of the Island so that the boat visitors will know what the bog is,” she said, adding that it’s important for those who are only visiting the bog for a day to understand its historical significance.

With that in mind, Braig said the bog will be more accessible to the public now that the historical society manages it. “You will still need a permit issued by the historical society to gain access to the Bog. This is done to protect it from visitors who don’t know that it is and to keep them safe from the sumac on the island,” she said. “We also need to keep track of the visitors that come for a head count for when we apply for grants and funding to help us with the updates.” Braig said the Queen of the Lake II, a gigantic pontoon boat the Buckeye Lake Museum operates, makes about 35 tours a season for private groups as well as the open Cranberry Bog day June 16. “This year visitors do not have to enter a lottery,” she said. “It will be open to anyone.” She said there will be boats going back and forth all day from 9 a.m. to 4 p.m. The historical society will use its trained guides for the day and the state will not be involved. 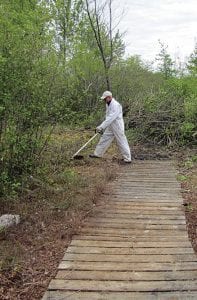 Braig the historical society signed a five-year contract with ODNR to manage the bog. “Each year another project will go forward,” she said. Braig said she hopes that by the end of that time the bog will be in good enough condition to preserve it for many more years to come. “We will then meet with (Buckeye Lake State Park Manager) Hal Harper and evaluate the work and the conservation aspects and look to continue for another five years,” she said. “With the fragile island it will take all of the five years. Only so much can be done each season as to keep the Bog happy and healthy.” Too much invasion would harm the bog. 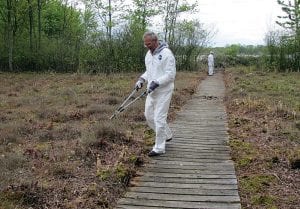 Braig said the historical society has the contract to care for the bog, however there is a group, “Friends of Cranberry Bog,” with a five person executive committee that reports to the historical society. The committee includes Braig, Buckeye Lake Village Council member Kaye Hartman, Lois Holler, Tim Mason, and Rob Klinger. “They make all the recommendations and present to me and I relay it to our board,” she said. “Anyone that is interested can join the ‘friends’ group. Its primary goal is to raise funds for the preservation and conservation of the bog, also they can help with areas and present ideas to preserve her.” 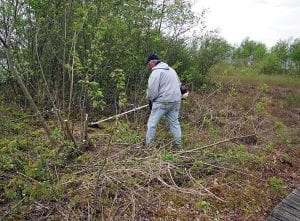 Braig said Friends of Cranberry Bog members may volunteer in areas they have strength, such as physical work, knowledge of plants, counting birds and other things. “Right now we have about 40 people including the Cranberry Bog Guides,” she said. “We hope to see it grow to 100 members along with conservation clubs, bird clubs, garden clubs and many others.” Braig said the bog cleanup process on a large scale will ease off as summer approaches and the plants begin to come back. “We don’t want to damage the flora or fauna or the mat of the bog,” she said.

Braig said all the work is being completed with the ODNR’s blessing. “We have a contract prepared by the lawyers of ODNR,” she said. “Hal Harper is our immediate contact and he’s very happy with the ways things are going.” Braig said that in the past the ODNR has only been able to devote one person to the bog. “The bog is way too much for one person to handle,” she said. “The state had the foresight to see that the (historical society) could raise the much-needed funds to keep the island in better shape. It needed so much attention that they were unable to provide. This is a win, win for everyone—the state, the society, the bog, and for the people of Ohio who really own it.” 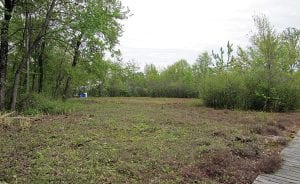 Braig said the historical society’s control of the bog makes life easier for everyone. “It will be a better situation, as the society is right here at the lake,” she said. “Visitors here will be able to stop in the (Buckeye Lake Museum) to get a permit and we will be able to provide guides for the visitors.” Braig said the ODNR’s bog visitation permit process was time consuming and hard to understand. “Many of the trips to the bog are educational,” she said, adding that the Buckeye Lake for Tomorrow group will be taking out more than 90 Lakewood and Millersport students in a few weeks. 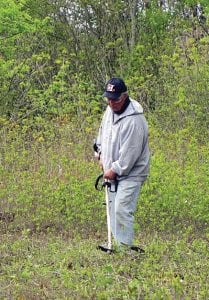 “We are happy for these trips as these students are the future leaders of our towns and someday we hope they will take over the care and maintenance of the Cranberry Bog,” said Braig.

She said the historical society also serves bird watchers, plant groups, and many conservation clubs. “Having them see the island and hear its unique story will build on more involvement creating a larger field of volunteers,” said Braig. “After all, the main goal here is to save the island as long as we can. It’s been here for over 16,000 years—what a wonderful thing. Hopefully, with love and care it will be here for another 200.”