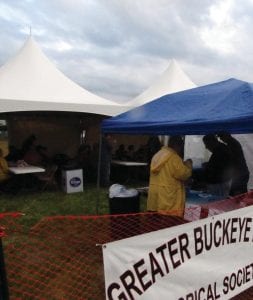 BUCKEYE LAKE- The second time was the charm Saturday for what has become the an nual Bogtoberfest, an event to raise funds and awareness for Buckeye Lake’s unique Cranberry Bog.

While she wasn’t specific, Braig said this year’s event raised “ten times” the funds as last year’s nearly rained out inaugural event. This year’s event experienced “iffy” weather as well, Braig said, but the Paul Clark Band’s popularity bested the clouds and the off and on light rain.

“ Paul Clark has an unbelievable following,” she said of the Bogtoberfest’s headline entertainer. “Paul has lived in Buckeye Lake his entire life and once played the Crystal Ballroom as a young man. He is well known as a very giving community leader to many organizations.”

Braig estimates 200 to 250 people attended the event throughout the day. “The beer garden seats 200 people and people were standing,” she said. “We’ll definitely do this again.” 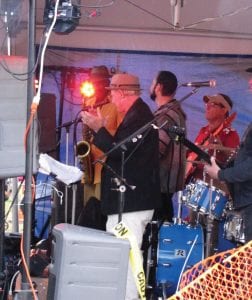 Braig thanked Our Lady of Mount Carmel church for allowing the event on its grounds, which coincidentally is near the historic site of the Lake Breeze Hotel, which burned down in 1966. She also thanked all the sponsors, visitors, and volunteers who made the event a success. “The Buckeye Lake Historical Society and museum has lost 70 percent of its income with the draining of Buckeye Lake,” Braig said. 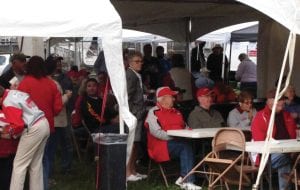