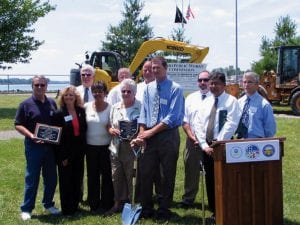 BUCKEYE LAKE – It was a big day for the Village of Buckeye Lake – possibly the biggest.

“This day has been 20 years in the making,” said Buckeye Lake Mayor Frank Foster as he opened an official groundbreaking ceremony for the village’s new $7 million public water project at the Nor th Shore Boat Ramp Wednesday afternoon. Several representatives of local, state, and national organizations spoke during the ceremony.

The Village of Buckeye Lake, one of the la rgest municipalities in the state without a public water system, is installing a water distribution system that will service the equivalent of at least 1,128 customers. The village will purchase bulk water from the Village of Millersport. Buckeye Lake will install nearly 67,000 feet of water lines, a pump station, and a water tower.

Foster said the project would provide “affordable, clean, reliable, and safe water for every resident.” He said the water system would also aid fire protection and expand the village’s tax base, as public water is likely to attract economic development. Foster thanked the members of the Buckeye Lake Village Council and particularly Council President Charlene Hayden for their efforts. 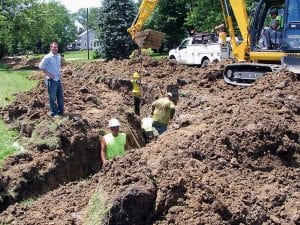 “You’ve come a long way,” said John Rauch, Field Agent Coordinator for the Rural Community Assistance Program, who helped the village navigate many of the funding complexities. He said he’d take a look at the water rates, which are estimated to be roughly $42 per month, and see how much the $5 million federal stimulus grant will reduce them.

“I’m just thrilled to see this taking place,” said Ohio Water Development Authority Execut ive Di rector Steve Grossman, who said the process has met with “trials and tribulations” over the years. OWDA is providing supplemental funding to the project.

Mike Miller, Ohio Public Works Commission director, said his agency has now setaside funding for the water project twice. The first was about five years ago, but the project couldn’t get off the ground. This time, however, it was a different story. He said Wednesday’s ceremony showed the village’s persistence. “In the absence of the stimulus (money), we couldn’t have funded this project,” said Miller. 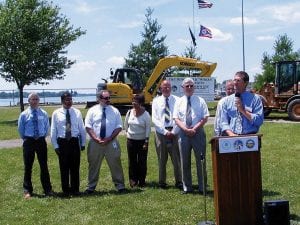 Ohio EPA Director Chris Korleski said we live in cynical times with a turbulent economy, but this project exemplifies several levels of government working together. “Government can work; we can help people,” he said.

“I don’t think anything could be more important to a community,” said US EPA Region 5 Acting Director Bharat Mathur. He said the project exemplifies the US EPA’s mission to merge economic development with environmental improvement. “I hope this gives new meaning to the saying, ‘I’m from the federal government and I’m here to help you,'” said Mathur.

“This project will create new jobs and improve the health and safety for Buckeye Lake residents and visitors,” said Ohio Governor Ted Strickland in an Ohio EPA statement. He didn’t attend the groundbreaking. “Today, we recognize the Village of Buckeye Lake for their efforts to move forward with this project even before federal stimulus funding was made available. Because of their efforts and the commitment of President Obama and Ohio’s Congressional Delegation, this project will directly benefit more than 3,000 Ohioans who call Buckeye Lake home.”

According to the Ohio EPA statement, a total of $6,615,297 is slated for the Buckeye Lake water project. A zero-interest 30-year loan worth more than $1.6 million from the Ohio EPA’s Water Supply Revolving Loan Account supplements $5 million in federal stimulus money.

“I think it’s a proud day for Millersport as well,” said Millersport council member Dave Levacy following the groundbreaking ceremony. The project will also help reduce rates for Millersport customers by expanding the overall customer base, he said. “We know how good our water is,” he said. Millersport will also receive state funding and $250,000 in federal stimulus funding to extend a waterline to Buckeye Lake. Levacy added that the project happened sooner than he expected.

But, it didn’t come soon enough for resident Charlotte Basnett, who said before she went to Florida for the winter that she wanted to see “dirt moved” before she returned to the village for the summer. The village didn’t quite make it, but it was close. “It could’ve been sooner, but I’m tickled to death,” said Basnett.

“It’s wonderful; I’m almost speechless,” said Hayden, who said the reality struck her as she saw hydrants being installed. “It’s been a long, hard road,” she said.

Actual work began earlier in the week on Worth Drive off Mill Dam Road in the village’s northern area. Foster said during Monday night’s village council meeting that the construction crews wanted to work in the more open streets of the village before tackling the cramped areas at the village’s center.

Director of Development Valerie Hans said the distribution system currently has the equivalent of 1,128 customers and she hopes for more as the village negotiates with the Leisure Village trailer park. Hans said the current rate is estimated at roughly $42 per month, but that is also subject to change. It could be lower.

Hans said Cranberry Bay and the Lynnwood addition would be the next to receive water lines. Eventually, two crews will work from either end of the village toward its center. The project should be complete in about a year.

She said traffic would be maintained on all roads during construction, although some might close for a very short period to accommodate equipment. “The roads will be a mess,” she said, but they will remain open.